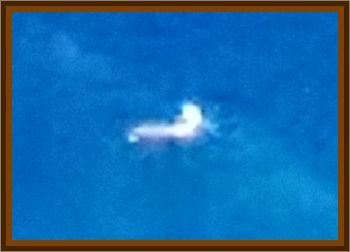 An off duty Detective Sergeant anchored his boat in Haverstraw Bay just south of the Indian Point power plant. He noticed a silent object moving south less than 500' in the sky above him. The witness noted that the unknown object had four spotlights evenly space along the front.

The witness could see that the dark craft was silhouetted against the night sky and estimated it between 30' and 100' housing blue and white exterior lights. The perplexed witness stated that in his estimation, the slow rate of travel and altitude that the object in all aspects, should have fallen out of the sky into the water.

The witness stated that when the craft was directly overhead, it stopped, maneuvered and proceeded back in the direction that it had been originally viewed, eventually disappearing out of sight, leaving one very confused New York State Police Detective.