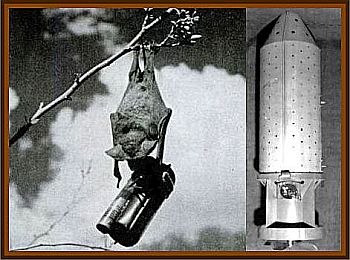 Bat bombs were an experimental World War II weapon developed by the United States. The bomb consisted of a bomb shaped casing with over a thousand compartments, each containing a hibernating Mexican Free Tailed bat with a small, timed incendiary bomb attached. Dropped from a bomber at dawn, the casings would deploy a parachute in mid flight and open to release the bats, which would then roost in eaves and attics in a 20 to 40 mile radius.

The incendiaries would start fires in inaccessible places in the largely wood and paper constructions of the Japanese cities that were the weapon's intended target.

The bat bomb was conceived by a Pennsylvania dentist named Lytle S. Adams, a friend of First Lady Eleanor Roosevelt. Adams submitted it to the White House in January 1942, where it was subsequently approved by President Roosevelt on the advice of Donald Griffin.

Adams observed that Japanese structures were especially susceptible to incendiary devices as many of the buildings were made of paper, bamboo, and other highly flammable material. The plan was to release bat bombs over Japanese cities having widely dispersed industrial targets. The bats would spread far from the point of release due to the relatively high altitude of their release, and would then hide in buildings across the city at dawn. Shortly thereafter, built in timers would ignite the bombs, causing widespread fires and chaos.

The United States decided to develop the bat bomb during World War II as four biological factors gave promise to this plan.

First, bats occur in large numbers, for example, four caves in New Mexico are each occupied by several million bats.

Second, bats can carry more than their own weight in flight, females carry their young, and sometimes twins. Load carrying tests were conducted in the dirigible hangar at Naval Air Station, Moffett Field, Sunnyvale, California.

Third, bats hibernate, and while dormant they do not require food or maintenance.

Fourth, bats fly in darkness, then find secluded places, often in buildings, to hide during daylight.

Errant bats from the experimental bat bomb set fire to the Carlsbad Army Airfield Auxiliary Air Base in New Mexico.

So Adams set about looking into it. He built up a group of supportive scientists, including Donald R. Griffin, the discoverer of echolocation, who called the plan bizarre and visionary, and said that, if done correctly, it was likely to cause severe damage to property and morale.

Adams took a team of University of California field naturalists on a bat collecting trip, we visited a 1000 caves and 3000 mines, he later recalled, and, after more testing and observation, settled on a species, the Mexican Free Tailed bat, the very type that had originally inspired the plan. Free-tails are strong, hardy, and, most importantly, plentiful. Adams and his crew netted hundreds of them outside of one Texas cave, and sent them back to Washington in refrigerated trucks.

The project was considered serious enough that Louis Fieser, the inventor of military napalm, was given the task to develop the bombs. It was a tricky project, the bombs had to be light enough for the bats to carry, and they couldn’t contain reagents, like phosphorus, that reacted with oxygen, because their bat carriers had to be able to breathe. Fieser settled on a light pill shaped case made out of nitrocellulose, or guncotton, and filled with kerosene. A capsule on the side of the bomb held a firing pin, which was separated from the cartridge by a thin steel wire. The whole thing weighed 17 grams, or about as much as three American quarters, and dangled from a string. Fieser designed a 0.6 ounce & a 1 ounce incendiary device to be carried by the bats.

The larger, housing bomb was entrusted to the Crosby Research Foundation, a joint venture of famous crooner Bing Crosby & his brothers Bob and Larry. Based on a design by Adams, it looked, from the outside, like a normal bomb, a cigar of sheet metal with a tapered nose and fins. But on the inside, it was outfitted with a parachute and heating and cooling controls, and stacked with enough cardboard trays to hold 1040 bats. It included 26 stacked trays, each containing compartments for 40 bats. The carriers would be dropped from 5,000'. Then the trays would separate but remain connected to a parachute that would deploy at 1,000'.

The whole thing was meant to work like this:

To start the clock ticking, technicians would inject a corrosive solution, copper chloride, into the side cartridge, and then clip the bomb to the bat’s chest. They would then load the bats into the trays and the trays into the bomb, cool it down enough that the bats would think it was hibernation time, fly the whole thing to Japan in the belly of a plane, and release the bomb over the target city. In midair, the bomb would set free the trays, which would stay attached to the parachute. The bats would thaw out, wake up, and disperse, settling into nooks and crannies all over the city.

Then, each bat would gnaw through its string and take flight again, leaving the structures riddled with mini bombs. When the copper chloride within each bomb finally dissolved the steel wire, the firing pin would snap, igniting the capsule and, soon after, the whole building. In this way, the industrial cities of Japan would be burned to the ground, bat by bat.

A series of tests to answer various operational questions were conducted. In one incident, the Carlsbad Army Airfield Auxiliary Air Base near Carlsbad, NM, was set on fire on May 15, 1943, when armed bats were accidentally released. The bats roosted under a fuel tank and incinerated the test range.

After several experiments and operational adjustments, the definitive test was carried out on the Japanese Village, a mockup of a Japanese city built by the Chemical Warfare Service at their Dugway Proving Grounds test site in Utah. Observers at this test produced optimistic accounts.

The chief of incendiary testing at Dugway wrote:

A reasonable number of destructive fires can be started in spite of the extremely small size of the units. The main advantage of the units would seem to be their placement within the enemy structures without the knowledge of the householder or fire watchers, thus allowing the fire to establish itself before being discovered.

It was concluded that X-Ray is an effective weapon. The Chief Chemist's report stated that, on a weight basis, X-Ray was more effective than the standard incendiary bombs in use at the time, expressed in another way, the regular bombs would give probably 167 to 400 fires per bomb load where X-Ray would give 3,625 to 4,748 fires.

More tests were scheduled for mid 1944 but the program was cancelled by Fleet Admiral Ernest J. King when he heard that it would likely not be combat ready until mid 1945. By that time, it was estimated that $2 million had been spent on the project. It is thought that development of the bat bomb was moving too slowly, and was overtaken in the race for a quick end to the war by the atomic bomb project.

Adams maintained that the bat bombs would have been effective without the devastating effects of the atomic bomb. He is quoted as having said:

Think of thousands of fires breaking out simultaneously over a circle of 40 miles in diameter for every bomb dropped. Japan could have been devastated, yet with small loss of life.

The infamous Invasion by Bats project was afterwards referred to by Stanley P. Lovell, director of research and development for Office of Strategic Services - OSS, whom General Donovan ordered to review the idea as:

Lovell also mentioned that bats during testing were dropping to the ground like stones.

For the remainder of his life, Dr. Adams dedicated his powers of invention and persistence to smaller ideas, including prairie seed bombs and a fried chicken vending machine. But he maintained the bat bomb’s legitimacy until his death. Unlike the atom bomb, he says, his method would have caused the devastation of Japan, but with small loss of life. We’ll never know.