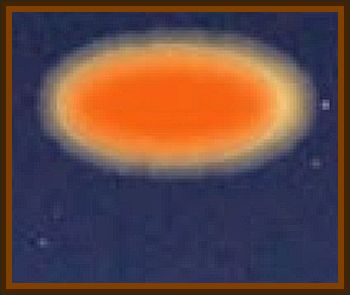 Rugby shape window area in sky with a craft inside.

The date was early February 2008, my car would not start the day before and I had arranged for a friend at work to pick me up from a ring road about 600' from where I lived in the morning.

In the morning, I went to the end of my road and cross over the ring road and waited about 300' from the traffic lights and stood there waiting to be picked up, it was a cold but clear day and across from me was semi detached housing, some traffic, but no people walking.

I looked down at my feet, they were cold and when I looked up again seconds later there in front of me is a sight I still cannot believe could have been there but there it was, it seemed to be a large 30' or more rugby ball shaped object just floating 20' maybe slightly more above the semi’s across the road from me, around 60' from where I was standing.

But that was not what got my attention but it was the object or part of the object I could see within this rugby shape window like opening, this object craft whatever was very shiny and seemed to be made up of angled shape panels, it was certainly larger then the rugby shape opening,

I seemed to be looking into another reality or whatever because it was rotating back forwards side to side in a very jerky way I just was unable to focus on it as it was jerking so much but all within the shape opening, I got glimpses of of different bits of this craft within the shape opening, I then noticed after about a minute or so a very dull vermilion part that did not seem to be of metal.

Then after about 2 minutes or there abouts had past it flicked that dull area into view and it looked like flesh, it’s very hard to explain, what that bit was but it was a long triangle shape which seemed to be raised above the very shiny metal around it then it flick to another angle, during this time I looked along the road to see if I could get someone to see what I was seeing but there just was no one around.

I was getting very annoyed because except for cars going past no one was around to confirm this, this was happening in a built up area of Bolton. I then looked to see if my friend was coming down the road when I looked back at this object it had begun to move up and to my right and all I could see now was a dull brown rugby ball shape, I could not see the bright metallic craft within it now and it went out of sight after around a minute or so.

I had just seen a shape with a object larger then the shape I have no idea but could this be way these UFO’s seem to disappear and change shape maybe when entering or leaving these, it could maybe be the way they travel to and from here undetected who knows,

This sighting really shook my belief in what is supposed to be real and what is not, this is why only now do I feel its time to put it down. Not very good but to the best of my ability.