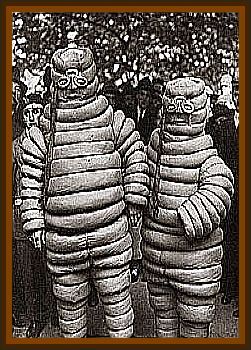 One November evening in 1926, a young Lancashire boy encountered a trio of strange entities in the back streets of Bolton.

Although no craft was seen at the time, the entities he reported seem similar to those associated with the European UFO flap of the mid 1950s. On the night in question, Henry Thomas was out playing hide and seek with his friends, despite it being past his bedtime.

Spotting a back gate ajar, he crept into the yard hoping to find one of his playmates hiding there. Instead, he found 3 strangely clad figures peering into the back window of a house. The figures were dressed in a style reminiscent of the famous Michelin Man. They wore bulky suits made from silver/grey rubber tubes, transparent dome like helmets and black boots.

The helmets were connected by tubes to small tanks strapped on their backs. The strange trio suddenly spun around to face the boy. They had pale heads shaped like lightbulbs with dark slit like eyes and tiny noses.

One made a gurgling sound, then all 3 advanced towards the terrified youngster, who ran home as fast as he could. Despite his fear, Henry felt that the entities were friendly and meant him no harm.

His family, though initially skeptical, eventually accepted that he was telling the truth. They nicknamed the beings the Three Wise Men.