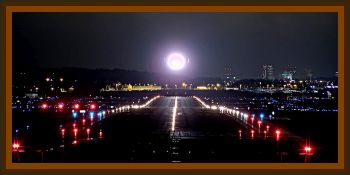 Sitting with friends up on Table Rock overlooking the Boise Valley, our hobby was to scan the sky to spot the then new satellites, to visit talking about college classes, and to enjoy the lights of our little city.

Table Rock stands at an elevation of about 1000' above the valley floor and looks out over the city and eastly toward Mountain Home. The airport was near the top of the ground horizon, with what was to become freeway I-80 running along the rim and out East past the South end of the main runway of Gowen Field.

We could easily spot approaching aircraft, watch it circle before landing and touch down. We could even see how the aircraft would then taxi from the end of the landing zone back to the terminal. The end of the landing strip is separated by perhaps 4 or 5 miles, and in those days was simply open desert with very few buildings.

The area roads were well know to us and the headlights of autos followed a well established pattern.

Distance across the valley to the rim from Table Rock was perhaps a few miles, and then a few miles further over spaserly settled rural area to the airport.

We could time landings at about every 8 to 10 minutes at that time of evening.

We all were amazed as one of the landing lights, which had a different color spectrum to it, still just a small circular light source, descended from the right of the landing pattern, onto the runway, and at the point all aircraft would slow and turn back to the tower, this light continued across the end of the landing zone, out across the desert, several miles out onto I-80.

It turned onto the route of I-80 headed east and followed in the same line of travel as the rest of the traffic towards Mountain Home 45 miles East. This same thing happened a couple of times that night.

We never saw it before or after.