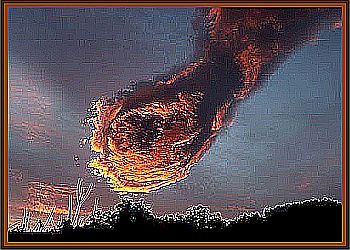 In 1973 I was living in Bogota, on the 30th floor of a 32 story apartment building facing the city of Bogota which is surrounded by the Andes mountains.

One evening we were entertaining several people and happened to look out over the city and saw a huge fireball coming directly toward the city from the mountains across the valley. It was travelling slowly, in a straight line and appeared to hang over Bogota for quite a while.

We noticed on either side of the city, coming up just over the lip of the mountains, a craft which would travel vertically up and down, as if checking on the ball. The ball travelled backwards towards the far end of the valley, began to descend and changed from red to white while descending.

For a two week period after that, at the same time every evening, we would see three craft come up over the lip of the mountains and one would come in and hang over the city. It would be there one minute, then blink out as if you had turned off a light switch, then come on again. It would do all kinds of crazy loops and turns. It would always travel back to the mountains in a straight line, and when it would descend behind the mountain ridge, would start to change color.

I watched this for 2 weeks and never forgot it. The fireball was so big is seemed to be right over the city and you could see the heat emanating from it.

We checked the papers the next day but there was no story. We think we saw this because we happened to be living in a tall apartment building. I have never forgotten it.