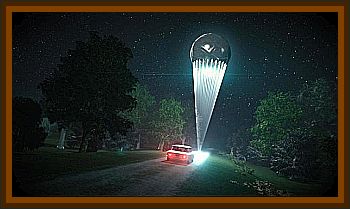 We drove to a fellows farmhouse, it was the night that Holland had to play France in the European championships.

It was around midnight when my friend and I decided to leave. We were the first to leave. I had to work the next day and I don’t like to go to bed late on work nights. We thanked our host and walked outside.

Immediately I saw a disk like object with many lights under it circling above the farm house. It was nothing that I’ve ever seen before and I said to my friend, hey look at that, my friend thought that it is was probably from the highway.

Imagine if you will total darkness on an old farmhouse road, no houses just a country road the highway was 4 or 5 miles away. We stepped inside the car and drove west towards a major road.

My friend said that the object was flying adjacent to the car on the passenger’s side. I looked and saw it, turned left and the object turned with us when I speeded up the object speeded up as well, turned right and it proceeded to follow and the same speed. We drove another few miles and this object kept the same distance from the car. I guess I got brave, our stupid, and stopped the car, got out to take a better look at the object.

It was spinning in a slow way counterclockwise and then stopped above a house on our right side, then started turning clockwise back towards us, it was interacting with us. To get an approximation on the size of it I would have to know how high that he was flying, what I do know for sure is that it was close and large the size of a couple of football fields. It made no sound. It flew over the car a couple of times. After a few minutes, I got back inside the car.

Trying not to alarm my friend I keep my thoughts to myself. I drove on turning left on the middle peel road We thought that we had lost him because of the low tree line. But that illusion was short lived because one minute later it was back on the passenger side of the car. When we reached Boekel we were driving under a lot of trees so we couldn’t see anything following us.

My friend said to drive faster and hide the car under our garage so I did, we got out of the car and ran inside the house. When I told the baby sitter she said:

It was a shame that she couldn’t have seen it.

Me being of the nosey types had to look outside and to my horror, it was hovering above the neighbor’s house. But now it was very close and I could see from the lights that he was slanting down in my direction, looking at me. I could see this because when this object was following us home we saw the whole underside with all the lights turning clockwise or counterclockwise now I could only see a row of lights where the lights were turning they were disappearing on the side and reappearing on the other side. I called for the baby sitter and my wife to come outside, but when they did the thing took off like a rocket it was like it just disappeared.

Note that this was instantaneous and did not make the slightest noise or wind like a helicopter would do.

Being a prior Air Force sergeant I know what the military has. When the 2 ladies went back inside a minute later it came back. And I called the ladies back. This time the object stayed and the baby sitter turned a little shade of white and said that she was going home because this is scary then she departed for her house.

Just then my neighbor, was returning home from a party. Walked over to me and the object took off again. When I told Jan of our strange night, He laughed and I told him to stay put, it will come back, just then it returned and Jan was surprised He had never seen anything like this and a couple of minutes later it took off and we went back inside.

Hoping that it would just stay away and it did. This weekend we heard on the news that there were a lot of UFO sightings that weekend.