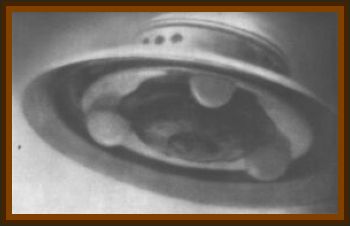 Attempting to establish a contact, George Adamski and 6 others drove into the desert, and were eating lunch when a cigar shaped craft was seen hovering.

This departed, but after they had driven ½ a mile and got out, there appeared a saucer hovering, which he photographed.

Then he saw a man beckoning, ¼ mile away, and Adamski walked up to him. He was wearing a one piece brown coverall without seams, and had shoulder length hair and a very high forehead.

Adamski asked him by signs what planet he came from, he replied by indicating the second orbit and speaking:

Venus, as Adamski had done.

He made me understand that their coming was friendly, and that, they were concerned about atomic explosions, nodding or shaking his head in response to Adamski’s questions accompanied by mental pictures, an extended partly telepathic conversation is recounted.

He conducted Adamski to the saucer, but not into it, it was translucent and hovering close to the ground.

Then he returned to it, and it took off.

Adamski was apart from his companions for 1 hour, but they could watch by binoculars.