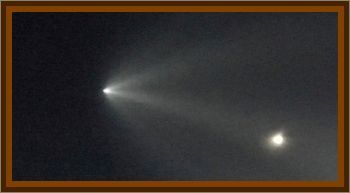 Neighbors say in the past two weeks they have seen multi colored lights in the sky, and the Missouri UFO Network is now conducting its own investigation.

A video of these orbs hovering is causing quite the stir in Blue Springs and is the topic of discussion.

Robert Kover first noticed them a few weeks ago and went down to get a closer look. He was confronted by a neighbor who thought he was spying on women, until he handed her his binoculars.

I showed her the star that was in the sky, just to get somebody else's perspective on it, and they said they had never seen anything like it before, Kover said.

Neely said: It was like nothing I've ever seen before, but with binoculars we could see it fairly well, and it was off in the distance.

Teresa Price saw it twice. The first time was the same night Kover and Neely did, and she noticed it again when she was walking her dogs the following week. However, the second time things were even more bizarre.

It was up in the sky and then it just dropped and stayed stationary in that lower position, she mentioned.

Price watched a local television stations report earlier this month on domestic drones, that are now being used by local governments and law enforcement agencies, and thought that was what it was.

It kind of made me think that there is some sort of drone out there. Why is it out at night? I don't know, Price said.

Robert Kover called the same television stationd Investigative Hotline and posted a sighting on a UFO spotters website. The night of an interview, a reporter of that television spotted similar sightings.

Kover was contacted by the Missouri UFO Network, who decided to investigate for herself the following night. That investigator interviewed everyone who claimed to have seen the UFOs and then set up telescopes to watch the sightings. Neighbors came out hoping to see the activity that captivated the community. As the sky darkened, one of them appeared. The Missouri UFO Network investigator initially dismissed it, Saying:

I am 90% sure we are looking at Vega in this instance, and there are some other planets out right now. But came to a different conclusion after others starting appearing. And after that put in a call to a colleague to take a look at what was originally thought to be Vega, that person described it as pure white.

That is not what we are seeing. We're seeing colors in this. I see green in this one and in the other I see red, green and blue, the original investigator replied. Addint: I don't think it's a planet at this point. I don't know what it is. It's unidentified.

This mystery continues, after more eyewitnesses from across the world come forward after seeing what some are calling UFOs.

Investigators still don't know what the strange lights were over Blue Springs, but more people are seeing the flashing objects.

Missouri residents aren't the only ones scratching their heads in disbelief from these nightly nocturnal visitors. The Missouri UFO network has been inundated with reports since original story was on a Missouri TV station last week.

The original reporting TV station has received many emails since first broadcasting the story:

The May 24 UFO sighting is the same object/orb seen here in New Hampshire back in March, was one email.

Another reads: I would like to report that the same case was noticed also in Croatia.

And closer to Blue Springs: I live in Liberty and saw the same thing a few years ago. I figured it was just a planet.

After The investigator first spotted the lights last week, three visits to a park a mile away from that Blue Springs neighborhood where they first made an appearance have been made. With positive results.

On two of those nights, the object appeared and we were able to look at it through high powered binoculars. The inspector asked to see the TV stations enhanced video, which confirmed what had already suspected:

See how they pulse back and forth? That is consistent with what we've seen on other nights, I'm a little bit scared myself. I don't know what it is.

The TV station again checked with NORAD, and they said:

they do receive calls on strange sightings, but they don't keep track of where they come from or what the sightings are.