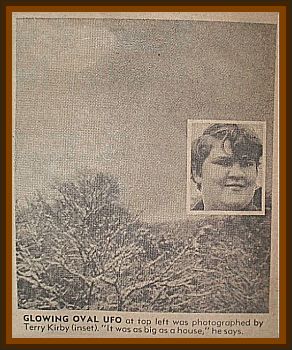 A flurry of UFO activity in the Fayette and Madison County area earned the region the nickname The Bluegrass Triangle.

In one instance, Madison County firemen were called to put out a fire that turned out to be a glowing flying saucer that they pursued for over an hour.

In another encounter, a preacher and his wife claimed that a craft about 10 stories high and 20 stories wide, with a zillion lights on it, approached their car while they were on their way to church.

A teenager named Terry Kirby took a Polaroid of what he says was a large, glowing saucer that descended near him while he was chopping wood.

In all, over 20 reputable citizens reported similar experiences in the region during the same timeframe.

And the proximity of the Blue Grass Army Depot has led many of them to speculate that it could be the source of the mysterious activity.