Abduction By The Greys In Bloomer 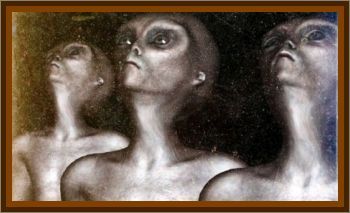 A family from the Chippewa Valley, apparently normal people, but with a paranormal story.

In Bloomer, 1997, where the lives of the people in one family changed forever.

The family had been terrorized for years by what they thought were bad dreams and nightmares, only to come out to find that they believed they'd been abducted by extraterrestrial beings.

Jane L. Doe who told about the night she awoke with a strange feeling that startled her from bed, drawing her toward a window. She had some big windows overlooking her yard in a wooded area, saw a craft hovering in the sky and immediately thought to herself, did I lock the front door?

That's when Jane ran to the door, but to her surprise, it was already opening, and a fog was rolling in. She braced herself against the door and it kept moving open. That is the last thing Jane remembered before being taken aboard a UFO by a strange creature, and she said she wasn't alone.

She said she recognized upward of 12 other humans on board, something in her knew what was going to happen.

Jane could hear a voice in her mind asking her why she was resisting.

Hypnotic regression was implemented and Jane remembered seeing three creatures, 3½' to 4' tall, the Greys. Jane remembered being taken from her house and brought on board the craft where they did procedures. Unexplainedresearch.com claims the way she described the creatures while hypnotized corresponds to 85% to 90% of other reports.

During the hypnosis session, it was found out that this was not the first close encounter this women. Strange things like this started happening to her at least 20 years earlier.

The poor women even started to cry while she was hypnotized.

When Jane woke up, she was convinced this particular alien experience was only a dream.

Later trace evidence however later found a large burn mark in her backyard, similar to other UFO visitations.

Jane went on to live a regular life, after her irregular experience with some spooky creatures.