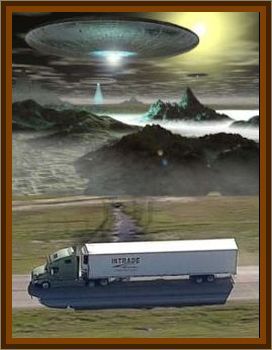 A couple from Yakima, Washington were driving their truck between Montana and Minnesota in 1984 when they encountered many unusual events.

In a newspaper article titled: Husband & Wife Truckers Tell Of Sighting, out of the Sauk Center, Minnesota newspaper, dated October 11, 1984 the Blair's terrifying encounter was described as follows:

They were completely unnerved, the thin man nicknamed Killer and his wife, sitting in the coffee shop sipping coffee and continuously smoking cigarettes.

I'm scared to leave, Robert, Bob, Blair said, and the look in his eyes left no doubt in your mind that he was, indeed frightened. He was not only frightened, he was terrified, continuously looking and motioning out the window.

He was terrified, his wife, Jackie, was terrified. They had been experiencing unexplainable phenomena for three days, 900 miles, across three states, and when they stopped in Sauk Center, Minnesota and begged for help hardly anyone believed them.

Bob & Jackie started out from Seattle, Washington three days before on a routine trip hauling liquid cooking oil to Madison, Wisconsin in a run they make regularly, weekly.

Things went smooth. They were enjoying the trip, and the shiny 3 week old paint job on their semi trailer boosted their morale. Then they got into Montana.

A couple miles ahead they spotted lights. We thought it was a plane, Bob said. The story of their bizarre experiences poured out of them, hands shaking as they drew sketches of the creatures, and interrupting each other to expand on a point.

It was just turning daybreak when they came into Montana, they said. It was out there with the stars. They made people think they were stars. Another man at a rest stop in Montana also saw the lights, 9 little ships and one big ship, Bob reported, moving up and down, back and forth in a lurching motion.

The couple continued on their trip, but the ships or creatures followed them in their semi. The individual things were described as shaped like about eight inch people with V shaped heads, wings on their backs. When the things got hostile with the truck and the drivers they shot fine needle-like shavings like silver metal through the glass of the windshield. They were shaped like a prehistoric bird, he said.

It just ruined the truck, Jackie said, pointing out paint chips and nicks in the new paint job. Every time I touched them I got blisters on my fingers and it turned into a V. He showed one on his wrist. In the dark their fingertips glowed from the unknown substance they had touched. We might be dying right now. Bob said. We don't know what it is. We have to get to a doctor.

The creatures were hostile, and went into attack modes several times, putting up dense fogs. One time when they stopped, It was like a backwards tornado coming from the mouth of the leader of the ships. It was like a ray that he was sending down with the funnel. He did it five times, then we left.

We didn't think it would harm us any, not at that point anyway.

They drove on for 7 miles, stopping two, three, four times, getting out of the truck and holding on to the top to look at the lights in the sky.

Then they experienced little black things, thousands of them coming out of the sky, squiggly things, all around us, Jackie described. They both experienced it.

Then back in the truck and moving, the lights kept up with them, even at 65 or 70 miles an hour.

Then, things that looked like Vitamin E Capsules began forming on the passenger side windshield, as they moved. They formed all around the window, the whole inside of the frame was covered with them. At first they were real little. They got bigger, there were big black ones the size of baseballs, whatever their size of color they all had a crystal-like thing inside them.

Then there were different colored things, yellow, lavender and green. They got bigger in size.

It would seem like we were hitting them, but when we hit nothing was there, like bubbles, Jackie said, having difficulty describing something that was unimaginable to her. When they hit the ground there was a spot the same color on the ground or on the tree, she said.

There was one about this big, Bob said, spreading his arms. He was driving about 60 miles an hour at this point, and then there was another and a third, what they termed spaceships. The third one they hit, a cloud burst off, and something shaped like a big peanut fell along side the highway, about 15 inches thick and hourglass shaped.

It hit the ground and it was a dirty yellow. she added.

At one point the things shot a piece of metal clean through the window and the sleeper and my jacket, she said, shaking her head, and looking out the window.

Jackie and Bob were trying desperately to get someone to see what they had seen. When they stopped the birds or spaceships stopped, flocked and waited for them to start traveling again.

We don't know why they are following us. Maybe one of them got on the tank or in the truck somehow, they said. Maybe they are trying to get it back.

They had called the UFO Center in Seattle (Bob Gribble, Director) from Montana and had an appointment to meet an agent in Madison, Wisconsin after delivery of their cargo. They were afraid to go further than Sauk Center, because when they stopped at Getty Truck Stop to fuel up, the ships had tried another attack and had landed in the trees across the highway.

We're not leaving town until somebody helps us, Jackie said pleadingly. We called our boss and he said get a motel and keep the truck running.

They spent the night at the Travel Host Motel. The motel manager reported they had not seemed distraught, or reported anything unusual to him.

Jackie called this reporter at home Monday night and said unusual things were happening in the motel room with forming of metal filings on the bedspreads, and formation of the same Vitamin E like things in the shower, which would blister her leg when they dropped. Now the blisters formed not on a V, but a T, C and I, she said.

She was very frightened. When we moved the truck over here hundreds of birds followed us. We knew they would come.

Because no one else could see or reported seeing the things, she analyzed, I am damn sure they turn invisible.

The police and Highway Patrol were in contact with the couple. None of the officials could see the objects Blairs claimed to be in the trees or on the lightposts waiting for them.

They were very scared people, Police Chief Trierweller agreed. But I did not see what they saw.

Trierweller said he talked to the couple's boss in Yakima, Washington. Bob had worked for him for 18 yeas, and were the best drivers he had. The truck they were driving is owned by S.D.T., Inc. in Yakima.

S.D.T. sent a relief drive to Sauk Center to meet the Blairs Tuesday morning. They left town about 1 p.m. with Jackie driving a rental car, and Bob riding with the new driver.

One or two people believed their stories, nobody could explain them. At least one witness saw the semi and rental car leave town Tuesday, but saw nothing unusual like fogs, formations or shapes following them.

Skeptics had their own theories. Many people agreed that they believe things can happen that cannot be explained in terms that people understand. Many people believe there could be creatures, space ships and unexplained happenings as described by the Blairs. Whatever people believe, the true story, a logical explanation, will probably never be found.

It will become another folder in the federal UFO investigation files, unsolved.