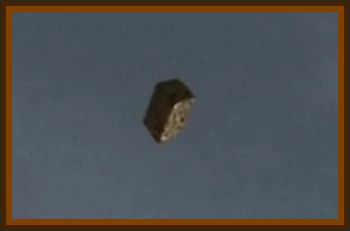 On a summer morning Barbara and her Uncle Earl were saddling horses and, as they left the barn by a rear door, they spotted an object, greyish/white and as big as a boxcar about a ½ mile away.

Stunned, they watched it for about a minute. Barbara’s Aunt and Earl rushed from the house when the 2 called to them, but Earl was too late to see the cigar shaped object which seemed to lift from the ground with a noise like the transference of air, Barbara said.

It disappeared so rapidly she couldn’t tell which way it went, she said.

When I see those rockets lift off now, on TV, I just say to myself:

This thing was something else.