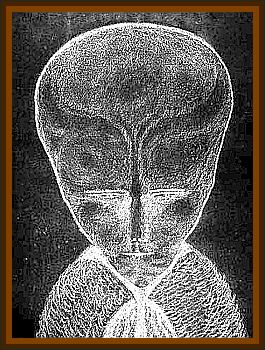 When I was 4 or 5 years old, I was awaken from sleep in what I think was the early morning hours because everyone was asleep and everything was quiet. My mother, brother, and baby sister were living with my great grandmother and we all shared one bedroom. My brother and I shared a bed, and across the room, my mother slept with the baby.

I wouldn't say I woke up, it was more like I was summoned to get up.

I didn't even think to resist and I was not scared. I slept against the wall, so I had to crawl over the iron bedpost at the foot of the bed so I wouldn't wake up my brother.

In my underwear, I went out of the room, through the short hall and dining room, and into the kitchen. There I unlatched the backdoor and stepped out onto the cold concrete steps that led down into the backyard.

And there, waiting for me, was a giant head hovering over the yard about 10' off the ground. It was glowing in a softly wavering greenish color. It did not move, but faced me as I felt compelled to set on the concrete in the darkness.

I knew it was not human because the top of it's head was very large in portion to the lower face, like it had a giant brain. It was bald and I saw no hair anywhere. From what I could see through the glow, the small, expressionless face below the massive cranium was human like but not fleshy soft, more like skin covered skull. It's eyes were all black and it's mouth was no more than a very thin line.

I was not scared because the head did not want me to feel fear. In fact, I was very calm and very much at ease. There was nothing I could do anyway. And somehow I knew that the head was not physically real, but was a projection of material, and that the real physical thing the head was showing was somewhere else and not just a hovering head.

Then the head began to send thoughts into my mind without moving it's mouth or changing any features at all.

What happened next is very difficult to explain because there are apparent and real factors of time involved. I'll do my best in bullet form what it showed and communicated:

1. It show me a wide river and dense bunches of fruit trees lined the far bank. And people were in those, but I could not see them. I knew there where there eating the fruit. The head told me that the people there were at the start of my bloodline and that his kind had been watching and guarding my line all the way down to me.

It said, expressed, that they were watching over other bloodlines, other families all over the world. It said I would meet some of them when the time is right.

2. It told me that there is an invisible war going on in humanity and that powerful and evil creatures, their enemies, ruled the world.

They made sure that all my generations were matched with the possessor of some pure blood, not mutated.

It said my blood was very close to pure as can be in all of humanity.

It said there were very few like me and that they guarded and protected all of us in preparation to battle the evil human agent fighting for their enemy.

It said I will not understand many things until I am much older and that I would be taught what I could handle and be developed over time.

The next thing I remember was awaking the next morning. I don't remember going back to bed.

The bighead visited me several times, two or three nights. From then until I was 14,

I knew I was being follow by something so small that I couldn't see it as it was always nearby.

And being a child I had imagined it was a tiny van, like Scooby Do, the cartoon kids I liked watching o Saturday.

I was different after that.

My mind began to change and expand until I was able to see reality completely different that everyone around me.