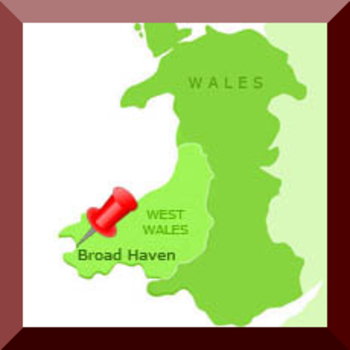 In the 1970s, the area was the scene of alleged UFO sightings and nicknamed the Broad Haven Triangle in the manner of the Bermuda Triangle, from a headline in The Sun that said Spaceman Mystery of the Terror Triangle.

On 4 February 1977, a yellow cigar shaped craft is believed to have landed in a field next to Broadhaven Primary School. A group of 14 children playing football saw the craft and a silver creature. The headmaster, Ralph Llewellyn, asked the children to draw the craft and he was surprised how similar the drawings were.

On 17 February 1977, the same craft was claimed to have been seen by some teachers at the school and by some dinner ladies, one of whom saw a creature make its way onto the craft.

April 19, 1977The owner of the Haven Fort Hotel in Little Haven claims to have seen an upside down saucer in a neighboring field with two humanoid creatures.