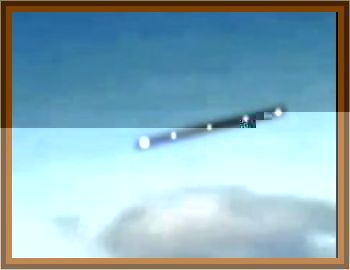 This is in Bexley, just North of Christchurch, South Island, New Zealand. I saw something in the sky, like a capsule or cigar shaped object.

At first it had a silver whitish body, with a darker grey forked tail.

While l looked at it it was just overhead, seeming to be coming closer. I was facing West.

The rounded edges, front and back, of the object called my attention to it initially. Its size appeared to be about 10 centimetres long if held at arm's length. I suppose it was about 30,000' high but it seemed very puzzling that there was no jet trail behind it.

So I went indoors to fetch a pair of 7 x 35 binoculars. My husband joined me and our home care nurse. As we three watched, a very bright light completely covered the object.

It did not happen as a flash of light, it seemed to start up and then finish with a burst of light. I was seeing a different rear design on the craft, with a forked end to it, and the color was now dark grey.

Another burst of light occurred and the object presented a rim, all around the craft, with either intermittent colored lights on the rim, or else the rim was composed of rotating colored lights. These were in tones of reddishorange.

This object then flew out over Pegasus Bay, towards the Northeast.