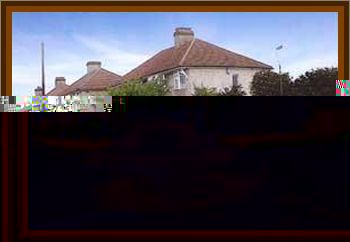 Margaret Fry spotted the object as she was making her way to her doctors surgery in King Harold's Way from her home in Hythe Avenue. Both she & her doctor, Dr. Thukarta, and around a dozen children playing in the street, saw the strange craft. Mrs. Fry described it as saucer shaped with a blue/silver/grey/pewter texture, yet none of those colors. She said it had three spheres set into its base, one of which flopped out, landing on the ground at the junction of nearby Ashbourne and Whitfield roads.

The children went over for a closer look before it rose into the sky and disappeared from view after a few minutes. Rodney Maynard, who was in his 60s and living in Belvedere, remembered the incident vividly. He was 15 at the time and working as a laborer on the building site in nearby Streamway.

We were on our lunch break when we heard something was happening in King Harold's Way. So we went up there to have a look. This thing had landed in the road. It took up the whole width of the road and overlapped onto the pavements. It wasn't on the ground. It had about 8 massive suckers. The center was still, but the outer rim was spinning slowly and it had white lights flashing, a strobe. He said there were about 30 people watching it and they could hear it humming. It had what looked like windows, but the glass was concave and moulded together so you could not see in. A couple of us went forward to try and touch it, and it began to spin faster. The craft then lifted slowly, tilting slightly and hovered above their heads. Then it moved slowly until it was over Bedonwell Primary School, where it hovered again for about a minute. It shot up into the sky and disappeared.

His brother, who was 16 at the time, also saw it. The craft was black, sleek and streamlined, with a surface like polished metal. It was very fine and beautiful. It wasn't a prank.

Maynard has never forgotten the experience but did not talk about it because people would think you were barmy & mentioned that he and his friends used to talk about it among themselves, but our mums kept telling us we had not seen anything.