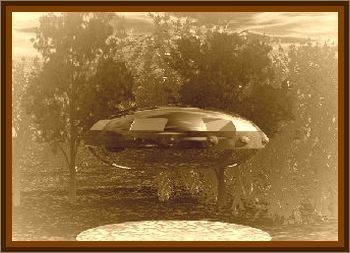 One completely baffling close encounter is regarded as being among the most persuasive arguments for the extraterrestrial hypothesis, and it is almost certainly the most solidly unidentifiable report from Massachusetts in recent decades. The events began to unfold shortly after 9:00 p.m. Nancy Modugno, age 11, was laying in bed when she noticed a bright light blinking through her window. She looked out and saw, maybe 40' away, an amazing object about the size of an automobile, brightly lit with flashing blue, green, red & white lights. The football shaped craft made a whizzing, ricocheting sound as it moved over the neighborhood at a very low altitude, just clearing the tops of the houses. As she watched, the thing descended and could be seen behind trees, apparently landing in a large field behind Beverly High School.

Horror struck, the astonished girl ran down the stairs and tried to tell her father about what she had seen. He tried to calm her down and went about adjusting the television set, which had mysteriously just lost its picture. Nancys mother, Claire, was visiting two friends, Barbara Smith & Brenda Maria, in an adjoining apartment at the time. Nancys father ordered her back to bed, but she became hysterical and refused to leave. At this point, Barbara & Brenda walked in to order a pizza. Seeing Nancy in a fit, the two women attempted to ease her fears and calm her down. They could see the flashing lights in the field, and told Nancy that they would walk over there to prove that it was just a plane.

Barbara & Brenda picked up Claire Modugno and walked down a hill to the field. The 3 looked up and saw something they could not have anticipated. There were 3 objects maneuvering in the sky, halting and circling as if they were playing tag. They were oval shaped, with bright flashing lights. 2 of the 3 were distant, but one was much closer, apparently right over the school.

The women crossed the field to get a better look. They could see flashing lights on the edge of the craft changing colors from red to green and blue. Brenda waved her arms at the object and it immediately stopped circling and moved across the field towards the women. They were awed. In her statement, Barbara said that, It started to come towards us, I started to run. Brenda yelled, Look up! It's directly over us!, I looked up and saw a round object, like the bottom of a plate. It was solid, grayish white, I felt this thing was going to come down on top of me. It was like a giant mushroom. Out of absolute panic, Barbara & Claire turned and ran up the hill. Brenda was all alone in the field, with the thing only 20' above her head. She stated, The object appeared larger and larger as it came closer. The lights appeared to be all around and turning. The colors were very bright. When overhead, all I could see was a blurry atmosphere and brightly lit lights flashing slowly around, I thought it might crash on my head! The others called to her, then she too turned and fled. One of the 3 was so petrified by the encounter that she literally wet herself.

While the women ran back to the apartments, the object smoothly moved over the school building. They got on the telephone to alert their neighbors to the spectacle unfolding outside. One woman was already in her yard, watching the flying saucers. And one man, upon looking outside and seeing the disks, called the police.

Police arrived to find a small crowd of people standing outside watching the closest object moving up and down above the school. Jokingly, Officers Bossie and Mahan asked the group, Where's the airplane? When the witnesses pointed to the thing, then at high altitude and looking like a star, the officers laughed. Then, suddenly, the disk turned bright red and dropped to a position directly over the school building. At this point, the officers became visibly shaken. Mahan stated, I observed what seem to be a large plate hovering over the school. It had three lights, red, green, and blue, but no noise, as it hovered, lights were flashing, Bossie said, It hovered and then began gliding. Some of the people got on the ground and were real scared! They jumped back into the cruiser and drove toward the object, down into the schoolyard. They could see clearly that it was not an airplane or helicopter and that it was shaped like a half dollar, with three lights, red, green & blue, in indentations at the rear of the disk, similar to back up lights.

Just as the policemen got out of the cruiser, the disk made a couple of passes over the school and began to move slowly away. It picked up speed and was last seen as it disappeared behind buildings. By this time, the two other UFOs had also disappeared, though nobody had seen them leave.