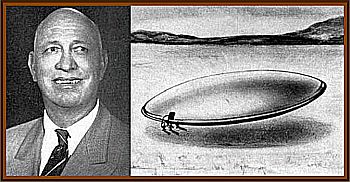 Truman Bethurum had finished his work and decided to visit a nearby hilltop because he heard the ocean once covered it and left deposits of seashells. When he parked his car he used a flashlight to hunt for seashells. He had no success during an hour or so of searching, so he returned to the truck and slept awhile.

Suddenly a mumbling around the truck awakened him. The mumbling was unintelligible. Bethurum looked out the window and saw 8 to 10 small men, all about 4'8" to 5' high. They were not dwarfs but fully developed men, said Bethurum. The strange men made no effort to molest him. Bethurum said he was afraid to attempt a getaway. He was still in the truck cab. One man spoke to him in a foreign tongue. Bethurum shook his head, indicating he could not understand.

Then the small man said: You name it.

It was perfect English, recalled Bethurum, who answered: My God, you can speak English, too?

We have no trouble with any language, replied the man.

Bethurum then climbed out of the truck and stopped, awestricken. He saw a flying saucer parked about 75 yards away from his truck. It looked like burnished stainless steel. He shook hands with all the friendly men and asked if their captain was around. The spokesman for the group volunteered to escort Bethurum to the captain, and led him toward the parked vehicle. Meanwhile, Bethurum looked around and saw the short men were Latin types, that is, with complexions something like Italians. All were neatly dressed in uniforms similar to those worn by Greyhound bus drivers. All had coal black hair and dark eyes. They had beautiful skin, which showed no wrinkles or blemishes.

The spokesman for the group took hold of Bethurum's right elbow. While holding the arm gently, said Bethurum, the man seemed to have me in his power completely. He gave the impression of great strength. Soon the group arrived at the ship. Bethurum described it as being made of some type of metal. He learned that it measured 300' in diameter and was 9' deep in the center. A 3' metal rim with beveled edges surrounded the saucer like ship. The rim, said Bethurum, was about 2' thick. The ship had no rudder or stacks. They entered the ship through a large wide door that Bethurum estimated was 4½' wide, and about 10' to 12' long. It was located atop the ship close to the metal rim around the edge.

Inside he met the female captain, Aura Rhanes. He described her as having a slender Latin type face, and wore a radiant red skirt, black velvet short sleeved blouse & a black beret with red trim. He went into her lounge and talked. The captain said she was from the planet Clarion, which could not be seen from earth even with progressive magnification, which he interpreted as meaning by telescope. She also said the planet was not known by people on earth by another name, such as Mars. She described Mars as peopled and contained atmosphere, industry and homes. She said the people on Mars did not have to have any special breathing apparatus.