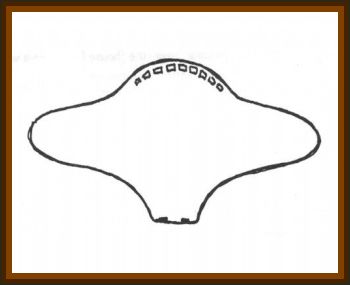 Martin Buxbaum was driving on Wilson Lane with his wife and noticed the unusual object silhouetted against the dark blue evening sky.

The object had the wingspan of a 717 but was flying low, he says. It was accented by a row of square windows in the front, and 2 cherry red exhaust lights to the rear.

But most mysterious of all, the object made no sound at all as it continued a straight North to South flight cutting diagonally across the path of the car, finally becoming obscured by some trees, Buxbaum said.

Nor did it have port or starboard lights as required by planes flying at night.

Buxbaum, author of 9 poetry books and a freelance writer whose stories have appeared in numerous publications including the National Enquirer, had time to pull the car over by Pyle Jr. High School and both he and his wife got a good look at the object, which he estimates was flying at an altitude of 1,000' and speed of 100 mph.

He is certain that it was a UFO in that it was unidentified, it was flying and it was an object. But beyond that he isn’t certain what it was.

I think it’s man made, I think it’s an experimental aircraft and they’re trying it out at night. For some reason they don’t want it seen, Buxbaum said.

Who they are is not exactly clear, but Buxbaum suggests it may have come from nearby military bases or even a private airpark. Nor is it clear why they don’t want it seen.

But Buxbaum said he saw it and is hoping others will come forward with an explanation. That would make me feel better, that I hadn’t blown my cork, he said.

Neither my wife nor I drink and our eyesight is good.

Upon returning home, Bubaum drew a sketch of the object and began listening to the news to see if others had seen the mysterious flying object.

If anyone did see it, they haven’t reported it to the police, the county sheriff said yesterday. Ironically, one of the last UFO sightings in the county was reported by 3 Germantown district policemen who saw an object about 60' to 75' across and with no clear definition making quick 90° turns in the skies above Gaithersburg.

Nor has anyone reported the latest sighting to the Center for UFO Studies in Evanston, IL., a clearinghouse for UFO information.

The most recent sighting in the Washington area was a March 8 sighting by an Adelphi woman Researchers at the UFO center believe she saw a lighted advertising plane. They had no quick explanation for the Buxbaum sighting but said they would look into it.

Dr. J. Allen Hynek, director of the center, said the center usually receives between 2 and 4 reported sightings a night, but most of them can be explained, he said.

Only about 1 out of 10 an really puzzling, he said. Everything that glitters is not a UFO.