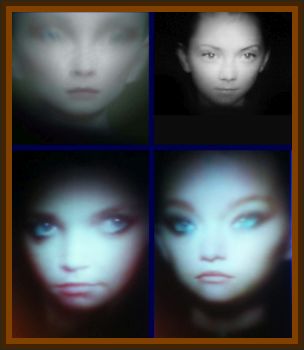 The witness went to be feeling very tired, he felt as if he had just taken a sleeping pill.

He fell asleep in a matter of minutes. Soon he woke up with a jump and heard a buzzing sound in the room. Without warning the wall on the North side of the bedroom started to glow with a very faint, dull yellow glow. He sat up in bed.

Then a being walked right through the wall, as if the wall had turned to liquid or something. The being was about 5' tall, and white in color. He had a large head and round, black eyes. He was in a black skin tight diving suit, and his arms were longer than someone his size. He had no ears and a very small mouth with very thin lips.

He walked over to the bed and started talking to the witness, not in audible way but apparently telepathically. The being told the witness not to be afraid that he came in peace, that he had to show him something that he had to learn.

The witness felt no fear as the being radiated peace and goodwill. The witness got up from bed and followed the humanoid, they walked right through the wall.

Then they were in a small dark room that the humanoid told the witness it was a vessel that could travel through space and time.

The humanoid then told the witness that they had the ability to travel in the closer dimensional windows to the planet Earth. The witness noticed a number of tall men working around the tables. They were wearing lab coats and looked human.

The humanoid left as one of the tall men came over and greeted the witness. He spoke in English and had black hair and very round dark eyes. He was not quite human. He told the witness that he was a hybrid between the human race and the humanoids.

The other men in the room ignored him and continued to go about their business. The hybrid always spoke in an unemotional voice, and his face was always straight, like a poker face. He spoke in a monotone.

The man told the witness that the baby was part of the new generation of hybrid beings. But some type of virus seemed to be killing them. He was told that there were other powerful forces in the universe determined to kill off the humanoids and all their offspring.

Then the original humanoid was standing next to the witness and told him that it was time to go home. He was brought back to the dark elevator like room. He then found himself awake on his bed. He was suffering from a very bad headache.