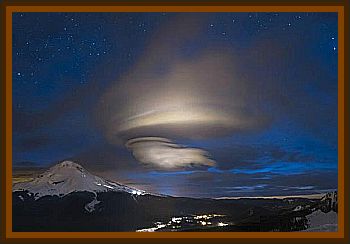 Giampiero Monguzzi and his wife, on the Scerscen glacier, noticed with alarm that all sounds had ceased, even their voices became inaudible.

Then they noticed, 600' away, a gigantic object on the ice, it was lens shaped, with a red antenna on top.

Monguzzi took a photograph, then he saw a man in a metallic diver’s suit approach and circle the craft, as if inspecting it.

The suit almost looked hairy. He carried something like a flashlight. Monguzzi photographed him. He disappeared behind the disk, then part of its surface began to rotate, and the craft rose like an elevator, showing many portholes in the upper half.

After its departure, sounds returned. No trace was left on the ice.