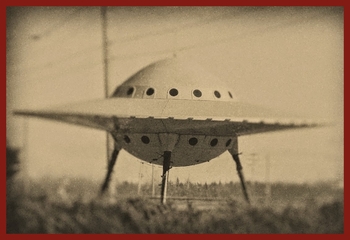 Was the twin landing of UFOs at New Berlin, NY a repair mission or something else?

A woman steps out onto her porch on a cool autumn night in 1964. Looking up, she sees what appears to be a shooting star fall onto a hillside opposite her, 2/3 of a mile away. Strangely, she sees another falling light which she watches descend from the sky in a vertical manner, but then it stops before it reaches the ground. It then starts to move horizontally along and above a creek bed that runs parallel to her road. As it comes closer, it becomes intensely bright and starts to emit a low humming noise.

Calling out for her mother in law to come outside, the woman (Mrs. H) steps out into her driveway to have a closer look. Right at that moment, two cars coming up the road pass by with the second one slowing down and pulling off the road to get a better look at the strange object. The object then starts to approach the car which pulls back onto the road and speeds away. But now the craft shifts ever so slightly and comes directly towards Mrs. H.

As she runs back towards her house, her mother in law comes out onto the porch, takes one look at the strange object and runs back inside. From inside the house she pleads with Mrs. H to return to the house and forget about the UFO. But Mrs. H ignores her and stands transfixed, watching the strange object as yet another car approaches. Incredibly, the UFO starts to pace the approaching car as soon as it gets directly across from Mrs. H's house. Obviously frightened, the car rapidly speeds up to escape it. Finally the object moves away in a northerly direction and comes to rest in a field across the road, approximately 4000' away.

Now inside the house, Mrs. H and her mother in law focus a pair of high powered binoculars on the area where the craft has landed. They can clearly see a round structure, sitting on what seem to be landing struts. The underneath of the structure is illuminated by some kind of very bright light and in that light they see something else even more stunning; 5 or 6 entities carrying boxes and what looks to be some type of strange tool. As Mrs. H looks on through the binoculars, the entities use the hand held tools to extract a large contraption out of the craft. Then suddenly her mother in law utters a sharp cry and directs Mrs. H's attention to the Northeast. There, descending quickly from the night sky is a swcond light which comes to rest on the hillside right behind the first craft. Both Mrs. H and her mother in law are more than stunned and can't believe what they are seeing now; more figures getting out of the newly landed craft and hurrying to assist the other humanoid figures as they work on the first craft.

Sound like a scene out of the X-Files, Twilight Zone or even the 1960's show The Invaders? Actually, the above account of a double UFO landing is true and is just as strange as anything that either Rod Serling or Chris Carter could ever imagine. Taking place on the evening of November 25, 1964, just north of the small hamlet of New Berlin, NY nearest large city is Oneonta, 25 miles away, Mrs. Kathy Hatzenbuhler and her mother in law were witnesses to the whole startling event across from her property on New York State Route 80.

The most astounding part of this encounter was, of course, the humanoid figures trying to repair the grounded craft. As Mrs. Hatzenbuhler described them:

They seemed to be dressed in something like a skin diver's wetsuit. It was a dark color and their hands were visible...out from the wrist of the suit. Their skin was lighter than the suit that they were wearing. They were built like men...the only difference was that they were slightly taller, between 6½ and 8' tall, they seemed to have hair like we do, although their hair wasn't long it seemed to be well barbered, fairly close to their heads.

After the second craft approached and landed just beyond the first one, five more entities exited it to join the crew working on the first object. Mrs. H. watched through her powerful field glasses as almost all of them worked hard to cut long sections of what appeared to be heavy dark cable.

Hazenbuhler felt quite safe watching the whole procedure, but her mother in law grew quite frightened. They both considered calling the authorities, but decided against it as they felt that the police or sheriff might end up harassing the entities. Also, both ladies later told investigators that they felt that the entities were watching them back, even more closely the whole time.

The crews from both ships worked nonstop for four hours trying to refit the contraption they had removed from the one craft, back up into place. Three attempts failed, but on the fourth try they succeeded. Hatzenbuhler explained what she saw after that: I could see them quickly pick up everything they could pick up and the men who had come down from the vehicle above them on the hill ran back with the materials up there. These men were running with something extremely heavy, like two men with a toolbox, a heavy one that required two men to carry. There were at least two more toolboxes, and there were two men who were laboriously running, and it looked like they were picking up cable pieces that these other men had left. They ran up the hill with them and then, I didn't see them anymore.

Then, around 4:55 a.m., the whole episode abruptly came to an end. The vehicle on the uppermost part of the hill left first. It went straight up, almost like an instantaneous disappearance in the direction it had come from, south-southwest, Hatzenbuhler recalled. A minute later the other vehicle rose straight up, went to the crest of the hill, rose a little further again and shot off in the same direction, at the same speed. And that was it.

The next day curiosity got the better of her and she and her husband, a chemical engineer, made their way up to the area where the craft had landed. There they found two sets of evenly spaced triangular depressions, 14" wide and around 18" deep. But they also found something else that amazed them both, there sitting on the ground in full sight was an apparent piece of cable. Hatzenbuhler later described it to investigators: the outer part of it looked like wrapping, something like a brown paper towel, only it wasnt like our paper towels. It felt, like that and was dark brown in color. It seemed to be some sort of tubular cable wrapping. And in the center of it, it had been cut laterally, you could see a strip, maybe an inch wide. It was something that looked like finely shredded aluminum strips laid in there. It had the color and feel of aluminum, although it wasn't aluminum. It didnt behave like aluminum. Aluminum will crumple and this wouldn't crumple. You couldnt crease it. It was inside, strips of this, laying inside the paper. You could remove the inside, for the outside paper had been cut along the length of the piece, but it was all together. They then gathered a piece of it and took it with them back to their house. But unfortunately, before any investigators had a chance to examine it, it was lost.

Initially, Mrs. Hatzenbuhler, her husband and her mother in law told no one of the unbelievable events of that night. As time wore on however, and no answers came to light as to what exactly they had seen, they began discretely asking around if anyone else had glimpsed anything odd in that general vicinity that evening. Eventually word got out and the three largest civilian UFO investigative organizations at that time: NICAP, APRO and CSW did in depth interviews with the primary witnesses and some ground investigation as well. All three investigations corroborated with each other exactly, leaving very little doubt about the facts involved.

A few years later, a prominent psychiatrist from the New York City area, Dr. Berthold Schwarz, who had an overarching interest in the paranormal, arranged to visit Mrs. Hatzenbuhler at her home in Pennsylvania, she and her husband had since moved from New Berlin. There he interviewed her extensively, both consciously and under hypnosis, and also administered a small battery of psychological tests including the Cornell Medical Index Questionnaire and the Minnesota Multiphasic Personality Test. Scharwz found her a happy and well adjusted woman and the tests showed her to be "healthy,open and straightforward." In his report he also mentioned that she stuck to her story and presented a well organized account and when her data from disparate sources and times were reviewed, there were no inconsistencies. Outside his report Schwarz made indication that she had been as truthful a witness to a close encounter that he had ever interviewed.

And there the case stands to this day; as puzzling and paradoxical as first reported. Did Marianne Hatzenbuhler and her mother in law witness something so rare that there are hardly any analogues to it in parapsychological research? Or were they terribly mislead in what they saw, either witnessing an elaborate hoax or something else altogether? There is no certainty on either point, for indeed, with regards to the double landing on that cold night in 1964 in upstate New York, the truth is still out there.