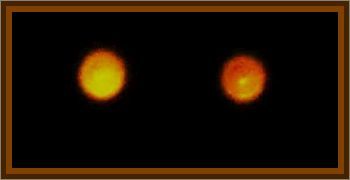 All the witnesses were children at the time, ranging in age from 7 to 14. We were collecting wood for our campfire when we noticed a very bright steady orange light moving from the zenith toward Jay's Peak, which was East of our location. It made no sound and did not deviate from its course.

We followed the object until it became obscure on the horizon, when we noticed another, identical orange UFO on the same path and at the same speed as the first. It, too, eventually vanished on the eastern horizon after being observed for approximately one minute.

The next day, I reported this sighting to the Enosburg Falls, VT police department. The other children claimed that the objects emitted many different colors, which I duly reported, but the only color I personally remember was a steady, unwavering orange.