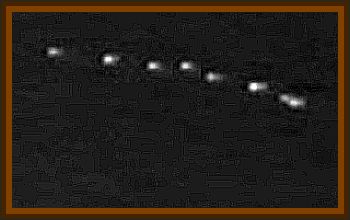 This was in September or October 1994 or 1995. The dates are fading over the years but the experience, I will never ever forget.

I had a visit from a local radio station some days later maybe they can help me find the right year and date.

Well back to the incident. This one happen in Norway outside the city of Bergen. It was late at night around 1:00 a.m. when I went outside in the garden downstairs. It was a clear and bright night sky and as usual I gazed to the stars looking for whatever might turn up.

Then from the south, 7 bright white lights came flying. They were flying behind each other. 7 planes at this time.

I thought to myself. Also here there were no other lights that could tell me if these were ordinary planes, there were no sound either.

The last one in line took a big turn out in the sky at a very high speed and went back in line with the rest. At this time I was jumping around in the garden. I called for my wife and at the same time I sent out a thought:

Please, if this is what I think it is please give me a sign.

At the same time there came a flash from the object in front. I sent out the same thought again and it happen again. At this time my wife had came out and saw the objects. My God I was communicating with ET. Or so it seemed.

Later I was interviewed by a local radio station and had a call from a local newspaper that would like to do something because there were several witnesses further North that had also seen these objects. But nothing happen.

Typical of the media.

What I am about to tell now is up to you to decide to believe or not.

At the time of this incident me and my wife were in contact with ET. Plain and simple. And when I asked them about this incident, the flashing of light and so on, I was told to never question the power of thought.

I also see now that there are some things with both of the stories that are similar.