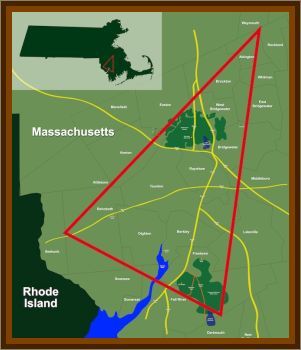 Bennington Triangle is a nickname given by paranormal author Joseph A. Citro to denote an area of southwestern Vermont within which at least five or as many as ten people have disappeared between 1920 and 1950. This mystery triangle, centered around Glastenbury Mountain and includes some or most of the area of the towns immediately surrounding it, especially Bennington, Woodford, Shaftsbury, and Somerset.

Glastenbury and its neighboring township Somerset were both once moderately thriving logging and industrial towns, but began declining toward the late 19th century and are now essentially ghost towns,unincorporated by an act of the state legislature in 1937. The Triangle also has been a hotspot for UFO activity, Big Foot sightings, and strange lights and sounds. Other sources do seem to support that such folklore does appear to date back as far as the late 19th century. This includes the local folk belief that Native Americans regarded the Glastenbury area as cursed, and avoided it, as well as tales of hairy wild men and other strange beasts in the woods.

Missing People in The Bennington Triangle:

1945 - Middie Rivers: Seventy-four year old, Middie Rivers was familiar with the area wilderness. An experienced hunting and fishing guide, on November 12, 1945, he escorted a party of four hunters into the mountain woodlands. Leading the way back to their campsite, Middie disappeared from view and vanished leaving only one clue. After an extensive search, investigators found a single bullet beside a streambed but no trace of Middie was ever found. Rivers's disappearance was the first in a series of missing persons over the next five years.

1946 - Paula Welden: On December 1, 1946 18 year old Paula Weldon, a sophomore at Bennington College vanished while hiking along Glastenbury Mountain's "Long Trail". As it is told, several people witnessed her departure from Bennington College, with the knowledge that she was headed out for a short hike. Two elderly hikers reported seeing her on the trail, approximately 100 yards ahead of them, minutes before she disappeared. They claimed that she rounded a corner on the trail, and when they reached the same corner, she was gone, and was never seen or heard from again, despite extensive searches, FBI involvement and even a $5000 reward for her safe return. Although the ensuing manhunt brought in the FBI and even used a clairvoyant, as in the case of Middie Rivers, no trace of Paula was ever found. Her case became part of local urban legend, as people speculated about her becoming a wild recluse on the mountain, or perhaps fleeing to Canada to marry a boyfriend whose identity she kept secret.

1949 - James E. Teford: Exactly three years later, on December 1, 1949, Tetford, a resident of Bennington Soldier's Home disappeared from a commercial bus. Although he was seen boarding the bus and at the stop before Bennington, when the bus reached its destination, Tetford was gone. Although his luggage was found in the luggage rack and a bus timetable lay open on his seat he was never again seen.

1949 - Three Hunters went missing in the area around 1949, but there is little evidence to back up the claims.

1950 - Paul Jepson: On Columbus Day 1950, 8 year old Paul disappeared from the family farm. He disappeared from his mother’s truck, while she tended to her pigs, Paul was tracked with dogs. His scent was apparently picked up and followed to a local highway, which happened to be very near where Paula Weldon had disappeared. No trace of the child or his bright red coat was ever found, although hundreds of volunteers combed the mountainside in search of him.

1950 - Frieda Lander: Not quite three weeks later, 53 year old Frieda Langer slipped into a mountain stream while hiking with her cousin. Promising her cousin that she'd catch up with him after changing into dry clothes, Frieda disappeared on the walk back to camp. Hers was the only body found, but not until the next spring. On May 12, 1951, Frieda Langer's decomposed body emerged near the Somerset Reservoir, although the area had been thoroughly searched at the time of her disappearance. Oddly enough, the one solved disappearance was the final disappearance on Glastenbury Mountain.