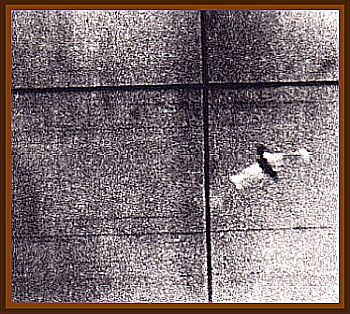 An ADC radar near Bellefontaine, OH, picked up a high speed unidentified target moving southwest, just north of Dayton. Two F-86's from the 97th Fighter-Interceptor Squadron at Wright-Patterson were scrambled and in a few minutes they were climbing out toward where the radar showed the UFO to be. The radar didn't have any height finding equipment so all that the ground controller at the radar site could do was to get the two F-86's over or under the target, and then they would have to find it visually.

When the two airplanes reached 30,000', the ground controller called them and told them that they were almost on the target, which was still continuing its southwesterly course at about 525 mph. In a few seconds the ground controller called back and told the lead pilot that the targets of his airplane and the UFO had blended on the radar scope and that the pilot would have to make a visual search; this was as close in as radar could get him. Then the radar broke down and went off the air.

But at almost that exact second the lead pilot looked up and there in the clear blue sky several thousand feet above him was a silver-colored sphere. The lead pilot pointed it out to his wing man and both of them started to climb. They went to their maximum altitude but they couldn't reach the UFO. After ten minutes of unsuccessful attempts to identify the huge silver sphere or disk - because at times it looked like a disk, one of the pilots hauled the nose of his F-86 up in a stall and exposed several feet of gun camera film. Just as he did this the warning light on his radar gun sight blinked on, indicating that something solid was in front of him - he wasn't photographing a sundog, hallucination, or refracted light.

The two pilots broke off the intercept and started back to Wright-Patterson when they suddenly realized that they were still northwest of the base, in almost the same location they had been when they started the intercept ten minutes before. The UFO had evidently slowed down from the speed that the radar had measured, 525 mph, until it was hovering almost completely motionless.

As soon as the pilots were on the ground, the magazine of film from the gun camera was rushed to the photo lab and developed. The photos showed only a round, indistinct blob, no details, but they were proof that some type of unidentified flying object had been in the air north of Dayton.

Lieutenant Andy Flues was assigned to this one. He checked the locations of balloons and found out that a 20' diameter radiosonde weather balloon from Wright-Patterson had been very near the area when the unsuccessful intercept took place, but the balloon wasn't traveling 525 mph and it couldn't be picked up by the ground radar, so he investigated further. The UFO couldn't have been another airplane because airplanes don't hover in one spot and it was no atmospheric phenomenon. Andy wrote it off as an unknown but it still bothered him; that balloon in the area was mighty suspicious. He talked to the two pilots a half dozen times and spent a day at the radar site at Bellefontaine before he reversed his "Unknown" decision and came up with the answer.

The unidentified target that the radar had tracked across Ohio was a low-flying jet. The jet was unidentified because there was a mix-up and the radar station didn't get its flight plan. Andy checked and found that a jet out of Cleveland had landed at Memphis at about 11:40 a.m.. At 10:45 a.m. this jet would have been north of Dayton on a southwesterly heading. When the ground controller blended the targets of the two F-86's into the unidentified target, they were at 30,000' and were looking for the target at their altitude or higher so they missed the low flying jet - but they did see the balloon. Since the radar went out just as the pilots saw the balloon, the ground controller couldn't see that the unidentified target he'd been watching was continuing on to the southwest. The pilots didn't bother to look around any more once they'd spotted the balloon because they thought they had the target in sight.

The only part of the sighting that still wasn't explained was the radar pickup on the F-86's gun sight. Lieutenant Flues checked around, did a little experimenting, and found out that the small transmitter box on a radiosonde balloon will give an indication on the radar used in F-86 gun sights.

The people in the photo lab made a few calculations and measurements and came up with the answer: A 20' balloon photographed from 30,000' away would be the same size as the UFO in the gun camera photos.