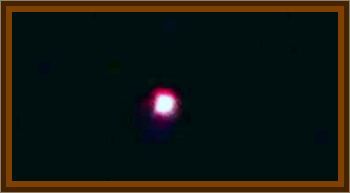 A round, bright, white light, with an amber red color on its lower side was observed from a Beechcraft Debonair aircraft flying from Tulsa to Abilene. The plane was approximately 15 miles from Wichita Falls on an outbound heading at an altitude of 6,500' and at a speed of 160 mph.

Thinking the object was an aircraft in trouble, the pilot took up course of 268° toward Benjamin, TX, in pursuit of the object.

At approximately 9:24 p.m., the object disappeared toward the ground near Benjamin. About 10 seconds later a red flash was seen on the ground. The aircraft continued toward a red glow at the point of the flash and at about 9:29 p.m. another red flash on the ground was observed. At a point about 4½ miles from Benjamin, the aircraft flew directly over the area of the red glows.

The two red glows were approximately ¼ mile apart. The aircraft circled the area with its landing lights on in an attempt to guide men on the ground to the source of the glows. The aircraft ran low on fuel and the search was discontinued.