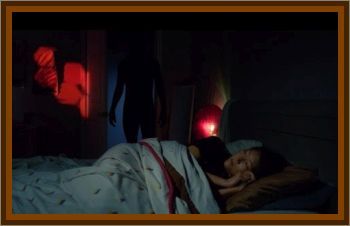 At 8:00 p.m., Ursulina, and her husband were in bed sleeping at their home in Brazil, when they heard a noise that sounded like someone trying to open the rear door to their house. Their cat was also acting very agitated.

Her husband, Francisco, went to investigate while Ursulina remained behind in bed praying. Soon she heard a sound resembling a radio being tuned and then a bright blue light invaded the bedroom. Looking towards the door of the bedroom she saw a strange creature standing there. She described the entity as being about 5' in height, with a huge head not in proportion to the rest of the body, wide shoulders, a very thin waist, and long dangling arms. It was hairless, had huge black eyes, a small lipless mouth, and little bumps where the nose should have been.

She described the clothing as a brown tight fitting coverall, with belts and boots. The entity stared intently at Ursulina. Despite her terror she managed to ask the entity what it wanted. She heard an unintelligible reply and then screamed for her husband. At that same instant the creature ran out the door and disappeared down the corridor. Her husband apparently was able to see the figure run from the bedroom.