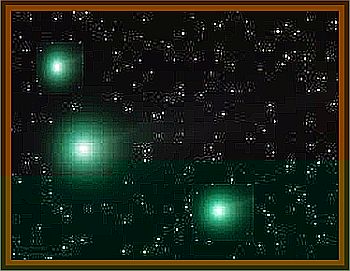 My husband is a long haul truck driver and we were on a run from Washington State to Albuquerque, NM.

We left the town of Beatty, NV heading south on SR 95 when I spotted 3 glowing objects to the west over the hills. My husband pulled over and we observed the objects just hover above the hills. They stayed in one spot for about 15 or 20 minutes.

My husband thought they were Military flares. I say that they were UFOs.

We took pictures and watched them just hover there the whole time. Then they disappeared without any noise at all.

The next day outside Boulder City, NV, at approximately 6:00 a.m. we videoed 15 black helicopters flying in the direction of where we saw the objects the night before.