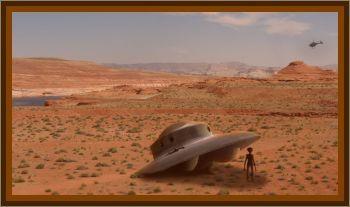 Retired X-ray technician Bina 'Beanie' Bean, stated that in either the spring or winter of 1963, she had been riding shotgun in an ambulance that sped to a crashed UFO site on a remote desert road some 18 miles out of Santa Rosa, and returned with several nonhuman little bodies. She’d X-rayed them, she said, and described them in detail.

A military entourage burst into the hospital and cleaned out every scrap of evidence, threatening the hospital staff to keep their mouths shut.

Another small confirmation of this event came from a visit to the elderly widow of the ambulance driver. When pressed, she seemed to vaguely recall that the Air Force had indeed once stripped the ambulance clean and taken the billable trip ticket, as Beanie claimed. But the widow had no idea what year or what decade that might have occurred in.

There were however discrepancies in Beanies statements, told to three separate interviewers. Sometimes she cited three bodies were found and sometimes two. In one account they were lined up under a sheet near the crashed craft, in an another, she described the bodies as half in, half out of the craft. In that same report, Beanie talked of a coroner’s inquest at the hospital, bringing in people off the street as witnesses.

In a separate statement, she and a Dr. Galvin were the only people present for examination of the bodies.