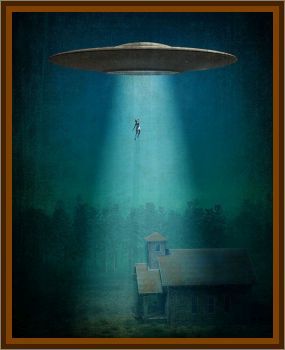 One evening , couples and friends Mike & Debbie joined Steve & Annie at their house for a barbecue and several drinks.

The night suddenly took a strange and frightening turn a little after 10:30 p.m.

An unusual disk type craft hung over them. They watched it for several minutes before all of them began to feel extremely nauseous. The UFO then vanished as quickly as it had arrived.

Steve looked over to the barbecue that only moments before had been glowing hot. It was now nothing but gray ash, the meat burned to a crisp. He checked his watch and was alarmed and confused to find more than 90 minutes had passed, it was after midnight. Almost ninety minutes had passed.

Over the next few days, they all began to feel generally unwell, have trouble sleeping, and an overall feeling of anxiety. The friends agreed to be hypnotically regressed, and all 4 told the same story. They had been taken on board the spacecraft, and into an examination room where they were placed on tables. The walls were described by Debbie as being round, but divided into squares, while Steve claimed he saw figures and drawings on the walls of various planets, including ones from our solar system that he could clearly recognize.