An Extra Star In The Constellation Pleiades 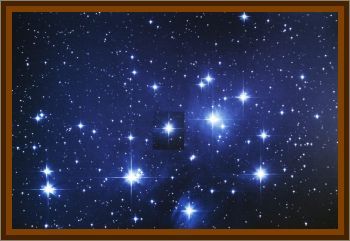 It was the July 4th weekend, Bay St Louis, MS was deserted, the nearby movie theater and bar were closed early, and the locals had left for holidays. My friend and I were waiting for the tide to go out, in order to wade in the shallow water along Beach Blvd. at Washington St., and entered at approximately 9:00 p.m. and waded toward the downtown area, each with a Coleman gas lantern and spear, looking for flounders and soft crabs.

The sky was crystal clear. I was 14 years of age and my friend was 17. Looking up into the sky above Beach Blvd. was West, slightly North. I was an astronomy buff, and looked up immediately into the unusually clear night; there were only a few street lights contributing to light pollution every few blocks, Beach Blvd. was much higher than the shoreline in places.

I immediately noticed that there was an extra star in the constellation Pleiades, slightly brighter than its very dim stars. As we walked back and forth between the sand bars, going steadily toward town, past it, and then back to Washington St., this extra star got brighter and brighter, gradually becoming a 4th, 3rd, 2nd, then 1st, 0+ magnitude star. On our return to Washington Street, we stopped at the railroad bridge, at approximately 2:00 a.m., I looked at my watch repeatedly, July 3rd, and this star was then as bright as a 200 watt light bulb. 200W bulbs existed then, and I was often in a building owned by my family that used them. It then began dripping what appeared to be a silvery liquid metal, like a foundry pouring molten lead.

The star took off over Henderson Point, to the northeast, at extremely high speed, completely silent, leaving 2 red orange glowing trails in the sky , which remained visible for over 30 minutes. I estimate the speed at thousands of miles per hour. I have no idea of the altitude, as I thought initially thought it a star, but it was obviously in the atmosphere. I never felt fear of any kind, although my companion was very scared. There was no missing time or any strange after effects.

Because of the the length of this event, I remember it vividly, over 50 years later.