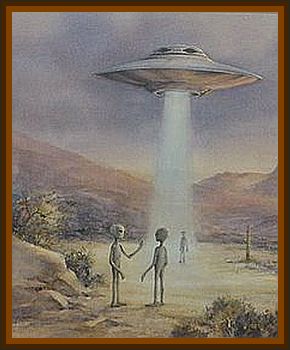 A young woman and her mother were traveling in their car along Puerto Rico Highway #2 in the Bayamon area, right behind the Bayamon Commercial Center.

The mother and daughter suddenly found everything becoming dark and obscure, and everything seemed to have vanished from view. They began to hear a strange humming noise, and to feel queer themselves.

The car seemed to be to light. The daughter could not feel if they were on the road and was very confused.

The mother seemed to be in a trance, just gazing ahead. A strange bluish/white light entered the car, and the next thing that they both remembered was being still in the car and seeing the road and the trees and the street lamps reappearing before them. They were both arriving at Arecibo, and they had no idea how they got there.

2½ hours had elapsed and they had no memory of what had occurred during that period.

Years later, under hypnosis the daughter Myriam, remembered that as she was driving everything around her became dark and she was no longer aware of the road, and all she could see was a faint mistiness around the car, and all she could hear was a loud hum. Then a bluish/white light came down from above and invaded the car, and she asked her mother what was happening. Then a brilliant ray of white light came into the car from the right hand side, and enveloped the mother, who disappeared.

Terrified, Myriam looked out of the car, and saw that hanging above it was a large flying object, of a metallic silvery/gray color.

At that same moment another beam of light enveloped her too. She then found herself going out of the car through the roof, passing through it just as though it did not exist. Glancing back, she saw that the car was floating in the air at a great height, very close to the huge round object. She looked up again at the flying object, and saw that a door in the side of it was starting to open.

Then she saw that there was a very strange, very tall figure standing in the doorway. He was a humanoid being, about 6' tall, and very white, very slim. He had a large head, somewhat rounded, dark eyes, not very big, and a gentle, tender kind and look. His mouth was very small with a soft smile, and his nose was normal, but very small. He had long arms, and hands with long fingers. His entire skin was of a pale gray, whitish shade.

Addressing her mentally the being said:

Come with me don’t be afraid.

She felt a great goodness emanate from that being.

He stretched out his hands and took hers, gripping them gently, and took her into the object. Once they were inside. He continued to tell her, telepathically, in a voice that sounded masculine, that she should not be afraid.

She was then assured that her mother was all right.

The entire interior of the craft was of a pearly silvery shade, very beautiful.

Her next memory was that of seeing a number of other gray type entities, similar to the tall one, but very small, only about 3½' tall, and together with the all one they take her up a little curved passage to a round chamber, on one of the walls of which there is a curved protuberance which appears to be a sort of seat that comes out form the wall itself.

Everything in the chamber appears to be molded in one piece, with the sole exception of a small metallic bed, with something like a white sheet on it, standing in the middle of the chamber. Beside the bed there is a small metallic table with a tray, also of metal, and silvery colored, with many strange instruments, and something resembling a compass.

In the room there were more of the little beings.

They communicate with her mentally, telling her they were going to help her.

A tall being and the little ones examined her physically and at a given moment, they introduce a sort of very fine, long metallic rods into various parts of the body. They explain that they are giving her an energy reinforcement so as to improve the condition of her organism.

They apparently took samples of her body with the same rods. Then the small beings brought some strange instruments resembling clamps and fitted them into her legs.

Instantly Myriam felt a powerful heat or energy rising up throughout her entire body. On the right hand wall of the chamber, several of the little grays were manipulating machines like computers with lots of little lights. The tall gray entity told her that she had bone cancer but that they were curing her. She was told that they were curing her mother too.

After the small beings placed an instrument on Myriam’s forehead resembling a compass, it began to emit flashes, at the same time the tall being explained that it was for her psyche that it was going to deepen her intuition even further. He also explained that his species was working in one of the creation’s plans, which watches over the continuity of the evolution of the worlds and of the races that inhabit them.

While the tall being was explaining all this to Myriam she saw him suddenly light up, become transfigure, and a beautiful aura of light enveloped him, and simultaneously she felt a powerful sensation of love and goodness emanating from him.

He also said that there are other beings resembling themselves, who are doing things with the government’s. The tall being went on to describe some of the physical changes that were coming to Earth. Soon she saw a tall, fair human type being, wearing a pearly white colored tunic of some shining material like linen.

The tunic fitted tightly at the neck, and gathered on the chest in pleats, and with long sleeves down to the wrists. On his feet he had gilded sandals.

Looking out through a wide curved window, she could see a lovely landscape, with great mountains. The tall blonde being told her telepathically that they were at a very high spot in the Swiss Alps.

Her mother, Sonia, recalled under hypnosis a powerful, cold, bluish/white light above the car and a loud humming noise.

Sonia described seeing a large smooth, dark bluish metallic thing, like a great big plate, in the air above the vehicle. The craft was not entirely circular, but had a part that was quadrangular and that light was coming from the underside from a hole and that there were some white seats inside there.

A little humanoid guided her into another chamber, where there were little seats fixed to the wall of the craft. As she was lying on a bed she saw 2 other beings, described as wearing white tunics, shining glowing. They were very tall and with very nice faces, almost angelic like. One of them had blonde hair, a silvery blonde, and looked very much like the other man like humanoid almost like twins.

They were very tall and with very fine features, and one point she was introduced to a normal looking oriental humanoid wearing a black cloak like outfit. Eventually they were deposited back into their vehicle.

The entity was about 6' tall, and very white, very slim. He had a large head, somewhat rounded, dark eyes, not very big, and a gentle, tender look & manner. His mouth was very small with a soft smile, and his nose was normal, but very small. He had long arms, and hands with long fingers. His entire skin was of a pale gray, whitish shade.