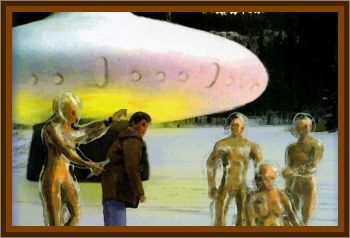 Brazilian topographer José C. Higgins witnessed an enormous disk some 150' in width, whitish grey in color, and supported by four metallic struts. Three beings, measuring some 7' tall, stepped out of the craft wearing transparent outfits which covered them like plastic bags. They had round eyes, bald heads & bulky round heads without eyebrows or facial hair, their legs were proportionally longer than a humans.

José could not determine if they were male or female, but found that they had a certain beauty about them.

Hearing a whistling sound, Jose saw coming down a lens shaped object with surrounding flange, it landed 150'away. It was of gray white metal, about 150' in diameter with a 3' rim, and 15' high, crossed by tubes in several directions, the whistling coming from these. Metallic legs, which bent a little, supported the craft.

Walking closer, he saw through a black glass window 2 persons watching him, a door opened beneath the rim, and there emerged 3 people enveloped in inflated transparent suits, with metal boxes on their backs. They wore shirts and shorts, which looked as though made of paper rather than cloth. Their heads were almost hairless, their eyes round and large, and their legs relatively long; they were nearly 7' tall. All 3 looked identical.

They spoke in an unknown language, and he noticed that they kept in the shade except for brief periods. One, pointing a metal tube at him, motioned Higgins to enter the door, through which he could see an inner door and the end of a pipe.

Using gestures, Higgins asked where they came from. One drew on the ground a dot, the sun, Alamo in their language, surrounded by 7 circles, and pointed alternately to the seventh circle called Orque, Uranus as we call it, and to their craft.

Not wishing to go there, Higgins showed them a picture of his wife, indicating that he did not want to leave her, and they allowed him to go.

From the forest he looked back to see them playing like children, jumping in the air and throwing enormous stones.

After half an hour, having carefully examined their surroundings, they re-entered and the craft took off.