Some Type Of Craft Over Germany 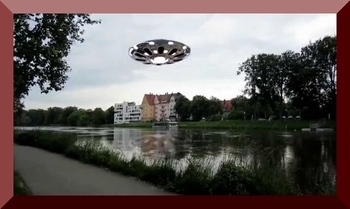 This happened when I was in the 4th Grade. I'm now 46. My father was an NCO in the U.S. Army stationed at the NATO base in Baumholder, and I was his dependent. I'm sure this story is of little use to you save as a curiosity at this point, but I've never written it down or reported it to anyone prior to this.

This was a very clear, bright day. There was no haze or clouds. I was between classes after lunch. A friend and I were looking out the class window over the town of Baumholder. I observed a rather bright object coming towards the school. It was curving in from what must have been the NNW heading towards the SW.

Because of its arc I was able to see at different times its port and starboard sides as well as it's bottom. There was no way to gauge altitude, so I couldn't tell you what its size was. Likewise, couldn't estimate speed, although it seemed to be in no hurry.

We thought at first that it was an airplane. We began to joke about the Russians, remember where I was, and that it was 1962.

As it came closer, nearly overhead the school, I began to realize that it was not a plane and that I had never seen anything like it before. We gradualy became silent with out joking. It had no wings, empenage, or markings. It made no vapor trail and had no exhaust. I saw nothing to suggest an engine, cockpit, or windows. I'd seen a lot of planes and helicopters in my young life, Army brat. It was not a plane or helicopter. Neither was it a blimp, balloon, kite, gyrocopter, or droud. It made no noise that I could hear. It seemed quite graceful.

It looked like nothing so much as a flying florescent light. It was long, but cut off very cleanly and abruptly on both of its ends. It's lines were exceptionaly well defined. It seemed seamless. It did not seem metallic. It did not seem to reflect the sun. It had a very curious dull, off-white, glow to it, not bright, but very steady and uniform. It looked as if someone had taken a cookie cutter and stamped out neatly a portion of the sky. I lost sight of it when it eventually flew beyond the vantage of my window. I can attest that I have never seen anything like this since, and I've looked.