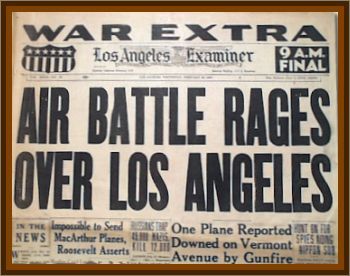 During February, unidentified objects caused a succession of alerts in southern California. On the 24th, a warning issued by naval intelligence indicated that an attack could be expected within the next 10 hours.

That evening a large number of flares and blinking lights were reported from the vicinity of defense plants. An alert called at 7:18 p.m. PST and was lifted at 10:23 p.m., and the tension temporarily relaxed. But early in the morning of the 25th renewed activity began.

Radars picked up an unidentified target 120 miles west of Los Angeles. Anti aircraft batteries were alerted at 2:15 a.m. and were put on Green Alert, ready to fire, a few minutes later. The AAF kept its pursuit planes on the ground, preferring to await indications of the scale and direction of any attack before committing its limited fighter force. Radars tracked the approaching target to within a few miles of the coast, and at 2:21 a.m. the regional controller ordered a blackout.

Thereafter the information center was flooded with reports of enemy planes, even though the mysterious object tracked in from sea seems to have vanished.

At 2:43 a.m., planes were reported near Long Beach, and a few minutes later a coast artillery colonel spotted about 25 planes at 12,000' over Los Angeles. At 3:06 a.m. a balloon carrying a red flare was seen over Santa Monica and 4 batteries of anti aircraft artillery opened fire, whereupon the air over Los Angeles erupted like a volcano.

From this point on reports were hopelessly different.

Probably much of the confusion came from the fact that anti aircraft shell bursts, caught by the searchlights, were themselves mistaken for enemy planes. In any case, the next 3 hours produced some of the most imaginative reporting of the war.

Swarms of planes, sometimes, balloons of all possible sizes, numbering from 1 to 700, traveling at altitudes which ranged from a few thousand feet to more than 20,000' and flying at speeds which were said to have varied from very slow to over 200 M.P.H., were observed to parade across the skies.

These mysterious forces dropped no bombs and, despite the fact that 1,440 rounds of anti aircraft ammunition were directed against them, suffered no losses. There were reports, to be sure, that 4 enemy planes had been shot down, and one was supposed to have landed in flames at a Hollywood intersection.

Residents in a 40 mile arc along the coast watched from hills or rooftops as the play of guns and searchlights provided the first real drama of the war for citizens of the mainland. The dawn, which ended the shooting and the fantasy, also proved that the only damage which resulted to the city was such as had been caused by the excitement, there was at least one death from heart failure, by traffic accidents in the blacked out streets, or by shell fragments from the artillery barrage.

Any attempts to arrive at an explanation of the incident quickly became as involved and mysterious as the battle itself. The Navy immediately insisted that there was no evidence of the presence of enemy planes, and Secretary of the Navy, Frank Knox announced at a press conference on February 25th, that the raid was just a false alarm.

At the same conference he admitted that attacks were always possible and indicated that vital industries located along the coast ought to be moved inland.

The Army had a hard time making up its mind on the cause of the alert. A report to Washington, made by the Western Defense Command shortly after the raid had ended, indicated that the credibility of reports of an attack had begun to be shaken before the blackout was lifted.

This message predicted that developments would prove that most previous reports had been greatly exaggerated. The Fourth Air Force had indicated its belief that there were no planes over Los Angeles. But the Army did not publish these initial conclusions.

Instead, it waited a day, until after a thorough examination of witnesses had been finished. On the basis of these hearings, local commanders altered their verdict and indicated a belief that from 1 to 5 unidentified airplanes had been over Los Angeles.

Secretary Stimson announced this conclusion as the War Department version of the incident, and he advanced two theories to account for the mysterious craft:

Either they were commercial planes operated by an enemy from secret fields in California or Mexico.

Or they were light planes launched from Japanese submarines. In either case, the enemies purpose must have been to locate anti aircraft defenses in the area or to deliver a blow at civilian morale.

The divergence of views between the War and Navy departments, and the unsatisfying conjectures advanced by the Army to explain the affair, touched off a vigorous public discussion. The Los Angeles Times, in a first page editorial on February 26th, announced that the considerable public excitement and confusion caused by the alert, as well as its spectacular official accompaniments, demanded a careful explanation.

Fears were expressed lest a few phony raids undermine the confidence of civilian volunteers in the aircraft warning service.

Wendell Willkie, speaking in Los Angeles on February 26th, assured Californians on the basis of his experiences in England that when a real air raid began you won’t have to argue about it, you’ll just know. He conceded that military authorities had been correct in calling a precautionary alert but deplored the lack of agreement between the Army and Navy.

A strong editorial in the Washington Post on February 27th called the handling of the Los Angeles episode a recipe for jitters, and censured the military authorities for what it called stubborn silence in the face of widespread uncertainty.

The editorial suggested that the Army’s theory that commercial planes might have caused the alert explains everything except where the planes came from, whither they were going, and why no American planes were sent in pursuit of them.

The New York Times on February 28th, expressed a belief that the more the incident was studied, the more incredible it became, If the batteries were firing on nothing at all, as Secretary Knox implies, it is a sign of extensive incompetence and jitters. If the batteries were firing on real planes, some of them as low as 9,000', as Secretary Stimson declares, why were they completely ineffective?

Why did no American planes go up to engage them, or even to identify them? What would have happened if this had been a real air raid?

These questions were appropriate, but for the War Department to have answered them in full frankness would have involved an even more complete revelation of the weakness of our air defenses.

At the end of the war, the Japanese stated that they did not send planes over the area at the time of this alert, although submarine launched aircraft were subsequently used over Seattle. A careful study of the evidence suggests that meteorological balloons, known to have been released over Los Angeles may well have caused the initial alarm.

This theory is supported by the fact that antiaircraft artillery units were officially criticized for having wasted ammunition on targets which moved too slowly to have been airplanes.

After the firing started, careful observation was difficult because of drifting smoke from shell bursts. The acting commander of the antiaircraft artillery brigade in the area testified that he had first been convinced that he had seen 15 planes in the air, but had quickly decided that he was seeing smoke.

Competent correspondents like Ernie Pyle & Bill Henry witnessed the shooting and wrote that they were never able to make out an airplane. It is hard to see, in any event, what enemy purpose would have been served by an attack in which no bombs were dropped, unless perhaps, as Mr. Stimson suggested, the purpose had been reconnaissance.