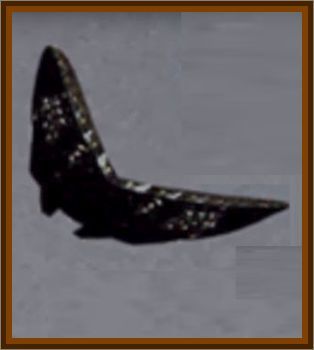 Richard Williams, his wife, and son were driving toward Willard, OH, from the north when they saw a low flying object that looked like a bat coming toward their car.

On the middle of each wing there seemed to be a rocket or a jet engine, and it had red and white lights on each wing and on the tails. They thought at first it was a plane crashing. It was 25' to 30' in diameter and came to within 100' off their car and then took off toward the east. There was a transparent cockpit in the front of the object, through which could be seen the movements of some kind of humanoid creature, silhouetted by a flashing light behind it.

Multiple reports of UFO sightings this night came from Tiro, Sandusky, and other sections of Huron County, OH around the same time.