Lit Object Moving and Then Hovering Above Hay Field 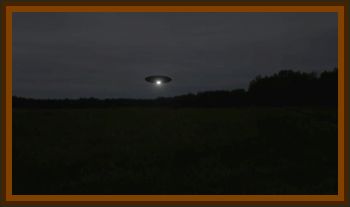 This encounter was one of 2 that I have had in my liftime, I am not a UFO watcher but have been convinced of something unusual happening around us.

On the night of my sighting I was helping out with farm chores for a neighboring dairy farmer, this is a remote farming community where we frequently pitch in to help a neighbor.

The farm owner and I had finished bringing the cattle into the barn to feed them prior to milking, as was customary we went to the house for a coffee and somthing to eat before we began milking.

We went to a sitting room which has a bay window that looks out over a 30 acre hay field, beyond the field is a large tract of timberland encompassing several hundred acres, this timberland is uninhabited and has no roads.

We had been sitting in the room just chatting when my friend asked if I could see the lights approaching over the tree tops, I had not but caught site of them immediatly.

We mused that they must be a helicopter. The VT and NY National Guard would often run training missions in our area out of Burlington VT or Plattsburgh NY so that is what we assumed this was.

We continued to watch the lights approach from over the timberland and as they came closer we could see that the light were very different from an approaching helicopter. The elevation was no more than 1500' which initially led us to beleive we were seeing a chopper, with the lights just a few hundred feet away and moving slowly but steadily toward the hay field we went outside to get a better look. As we walked out the front door the first thing we noticed was that there was a loud hum and definite electrical popping coming from the electric line on the poles that ran along the roadway.

I need to comment that this noise was alarmingly loud and was definitely coming from the utility lines, had I not been able to see the lines I would had guessed the insulators were arcing and bursting, but as we walked under the lines toward the hay field and the approaching lights we observed that the lines were motionless and there was no arcing.

We ended up standing side by side about 50' to 75' into the field. The lights were at this time just above the tree tops and I would estimate 800' to the southwest.

We could now hear what I would say was a droaning hum coming from the object, the noise would vary in pitch from low to high but in low tones. As the object approached the edge of the field it turned slightly to the right on a northeasterly course, we thought it would pass us on that course but as we stood there it entered the area of the field and then when it was 300' or 400' away it turned again and came toward us.

I did not mention that this was a clear night with stars visible, and that as this object got closer we were aware that it blocked out the sky in a large area, we guessed the the object was 200' wide by 500' or 600' in length. This may sound odd but we had the impressionm that the object turned to observe us.

It approached us to within 100' and remained at what we agreed was about 1,500' in elivation. What happened next was what convinsed us that this was a very unusual event, the object began to power down and became completly stationary, the engine noise was also completely gone.

It did not move in any dirction whatsoever, however the lights remained on. We were both scared to the point of wanting to run but curiosity kept us in the field. The only noise was the crackling of the utility lines now behind us and out next to the road.

The object was lighted. We were now looking nearly straight up at the object and as I recall we could see several lights on what to us was the front of the object, the lights were yellow/green/white/orange and blue.

We could see the front and along the bottom of both sides of the object the light were arranged at intervals of several feet apart along what we observed as the edges of the object.

We just stood and stared at this thing for 5 to 8 minutes, I remember us being really astonished by the fact that this thing was completly motionless and made absolutliy no audible noise.

When it was ready to go, it powered up and began to move on the same course that it had been on when we first observed it, no cars passed in the time that we were watching it. We had a clear view to the northeast into Canada from where we stood and the object was headed slowly in that direction.

My friend asked if we should call someone, I suggested that we call the Plattsburgh, NY air force Base and make a report.

He went back to the house to make the call while I stayed outside to watch it move away. The utility lines continued to crackle and pop even when the object had moved to 8 or 10 miles away, the electricity and phone was not effected.

I went back to the house after 10 minutes and found my friend on the phone, he said that he was speaking to a Lt. Colonel from Plattburgh air base. He was on the phone for at least 30 minutes making a detailed report of the event, this officer took the report seriously and was very patient asking many questions.

I was asked to go out and look for the object 3 or 4 times as they were speaking. I did observe 2 jet aircraft fly over the farm but they were heading easterly about 90° to the object, the object was at least 30 miles to the North by this time, but should have been visible to the pilots or picked up on radar.

The base did disclose that the planes we observed were from the base and that they reported no unusual activity. When the phone call ended I asked my friend if he thought he had been taken seriously or just led on, he said that the colonel was sincerly interested in what was said and appeared to be writing word for word the conversation.

It would be an understatement to say that this was a very unsettling experience. This fellow and I have never spoken to any one but our wives in regard to what we saw. I now live just 4 miles from the farm where this happened.

I stopped to visit with this man last year, we had not spoken to each other of the event in 20 years. As we talked the conversation went back to that night, he admitted that this has had a lasting effect that to this day haunts him, he said that several times over the years he has heard the same noise at night we heard from the craft but does not go out to look.

I was made curious by what happened and have used my curiosity as motivation to read all that I can on the subject. At the time of this occurance I was employed as a State Deputy Fish and Wildlife Officer, my friend was and is to this day a dairy farmer on this same farm.

I know it likely seems odd to not report this for 21 years, but to be honest I felt that it was not going to be taken seriously and my friend will not to this day speak to anyone in regard to what happened.

He does accept that I have chosen to make the report and may be willing at some point to weigh in with his account.