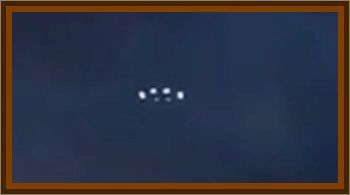 Driving southbound Hwy 15 about 15 to 20 miles south of Baker, CA, I was driving. Husband/passenger was asleep.

One vehicle behind me. No other traffic. Clear night, lots of stars. Saw a bright bluish star about 50° angle directly ahead in the night sky, which didn't twinkle and appeared to be getting larger.

Within 30 seconds or so, it had gotten as large as a dime, and was getting larger and lower and glowing a bluish color.

I couldn't figure out what it was.

Within another 5 to 10 seconds it had gotten nearly the size of a dinner plate and appeared to be descending and coming straight at me even though it was still 15° up.

I started yelling at my husband to wake up, as I was terrified.

Within a couple of seconds it was directly in front of me at 1000' elevation and was enormous. It extended beyond both sides of the highway by at least 100' and completely silent. I could see it was round and flat, appeared metallic and was glowing a bright bluish color.

I started screaming. It lit up the road like bluish daylight. It passed slightly to my right over a ridge of low mountains and crashed. There was a huge bluish light and the impact lifted my car off the road and over into the next lane, almost off the road. I pulled over, and the guy behind me pulled over, and we got out and tried to see if we could see anything, but all you could see was this huge bluish glow. The guy was just as shocked as I was.

My husband had only seen it when it was right on top of us. We, both cars, drove into Barstow and went to the Highway Patrol and told them what we had seen.

They said they hadn't heard about anything crashing, but they would look into it.

My husband drove home because I was too shaky to drive.

I called the CHP the next day. They said they were: still checking it out.

I called CalTech to see if the crash had registered anything, and they said they had nothing registering at that time, but they would look into it. I called Edwards Air Force Base, and they said that a small plane had crashed into the mountains, but they had no info and said to call the FAA.

I called FAA and they said they didn't know about any plane crash. There was nothing on the news.

I told people about it, but nobody had heard anything. Very bizarre.