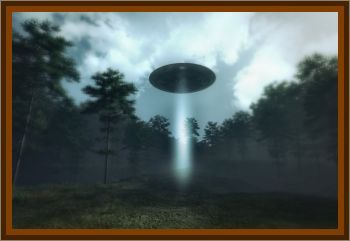 Two nights in a row last week, dispatchers at the Barron County Sheriffs Department took calls about strange lights in the skies. Although some maintain they observed a UFO, authorities are characterizing the incident as nothing unusual. At 8:30 p.m. January 4th, a call came in regarding something in the sky approximately 1 mile south of Prairie Farm with flashing red, blue and green lights but no sound. After watching the lights for about 15 minutes, the object appeared to have moved very little and seemed to be hovering in the same area.

Two deputies responded minutes before 9:00 p.m. and reported seeing something from County Highway A. Then a 3rd officer said that 2 objects could be observed. One of the officers deemed the objects to be satellites or airplanes. Then the next night at 8:22 p.m., dispatchers received another call about the same UFO type item as before. Lois Johnvin of the town of Prairie Farm reported that this time the lights were situated 4 miles west and 1 mile south of Prairie Farm. The lights were described as being blue/green and white and were bouncing up and down in the sky, remaining in the same general vicinity.

Within the next hour, the sheriffs department received more calls about the lights in different parts of the county. One sighting was southeast of Rice Lake of an object with red, green & white lights. Another sighting west of Cameron came from an officer. Authorities again deemed the object in the sky to be a satellite.

Lois said what she saw both nights was quite large, at least the size of the moon in the sky. She said her neighbor also witnessed the lights and said they were beautiful. The object would flash different colors, move all directions in the sky, seem to explode like fireworks, then continue to move around. The 1st night, she jokingly said she was too frightened to go fetch the binoculars out of her car because she didn't want to get beamed up. The 2nd night, she grabbed a camcorder and documented the lights, though they were farther away. Johnvin said she later asked if law enforcement wanted to see the video footage she had taken, but they didn't take her seriously and downplayed the incident as a satellite. While she doesn't totally rule out the possibility that the object was manmade, she is convinced that someone would be able to account for a satellites whereabouts.

Jason Hickok is a patrol officer with the Barron County Sheriffs Department who responded to the UFO reports both nights. He characterized the lights as very small in the sky and nothing out of the ordinary, most likely a satellite or an airplane. When asked what evidence brought him to that conclusion, Hickok declined to comment further.

Kristina Hauser, 20, of Chetek, was traveling with her family near the Rice Lake airport at about 9:40 p.m. when they saw the object. Hauser explained that the object, which initially appeared yellow, was flying toward Rice Lake and was dipping very low and moved very fast, heading back and forth across the road. She stated the object was hovering around their car for about a mile before it headed back to the airport. She also reported that after she was dropped off in Rice Lake, her family witnessed the object again on the way back to Chetek, hovering about 20' above their vehicle. They described it to her as a triangular or teardrop shaped object with purple and blue lights. They could hear no sound coming from the object, and a red laser like light was shining on one end of it to the ground. The object followed their vehicle another 4 miles before it just disappeared.

Hausers father, Glen, also spoke with various local police officers who had gotten calls on the object as well. While working at WalMart, Kristina also spoke with a Rice Lake police officer who had talked with local hospitals and the Federal Aviation Administration. All confirmed helicopters were grounded and there did not appear to be any air traffic in the area. By the way it moved, having no sound, and the way it looked, I knew it was not from this planet, said Julie Hauser, Kristina's mother. It was the scariest thing.

In a brief interview, Rice Lake Air Center Manager Jerry Stites explained that there were employees of the airport in the Rice Lake area who observed what appeared to be aircraft landing between 9:00 - 9:30 p.m., but no employees were at the airport when the sightings were reported. After reviewing security tapes, Stites added that to their knowledge, no planes landed at the air center Monday night. The helicopter at the airport also remained grounded until about 3:00 a.m. He added that he monitored the aviation radio until abut 9:00 p.m., and there was no activity in the vicinity, but explained that did not mean there were no aircraft landing.

Calls to Cumberland Memorial Hospital & Sacred Heart in Eau Claire confirmed there were no airport runs to the Barron or Rice Lake area. Information on helicopter runs from Lakeview Medical Center in Rice Lake, Luther Hospital in Eau Claire & Luther Midlefort Northland were not available at press time.

A Chetek family driving on Hwy. 53 near Hwy. 8 at about 9:40 p.m. Monday evening, April 14 is convinced they had an encounter with a UFO. Sheriffs dispatch logs have reports from Chetek and Cameron at about the same time. But Rice Lake airport manager Jerry Stites said he reviewed the survelliance tapes from the airport, which could have recorded activity along Hwy. 53, and found nothing unusual. He did say, however, that the tape showed an aircraft doing touch and go landings at the airport from about 9:20-10:35 p.m.

The family that reported the incident was Julie Hauser & her children, Christina, 20, Mariah, 16, and Josh, 13, all of Chetek. They first saw the object when they were driving northbound on Hwy. 53, taking Christina to her job at Wal-Mart.

Christina: What is that?

Julie: I thought it might be some new-fangled helicopter, then it turned on all those lights.

Julie: The UFO, which was larger than a semi, seemed to come directly to their pickup truck from the area of the airport. She said it hovered above the truck, only about 15' - 20' away. There was also a semi & another car on the road, and that the semi was swerving, possibly trying to get a look at what was going on.

Julie: It was just the scariest thing.

Julie: The object looked like a sideways teardrop, and had blue, green & white lights, and had a purple flashing light at the pointed end.

Julie: The UFO was definitely not a result of airport lights. There were lights on it that were lit. They were on the thing. I don’t know anything that has purple lights on it. And object quickly darted off, it turned and switched directions so fast.

Christina: I've always has a cell phone, with a camera, with her, but that night she was in a hurry and left her phone at home, which she never does.

Julie: We dropped Christina off at Wal-Mart, and had another encounter on the way back home, the object again launched from the airport and came toward their truck.

Josh: For a bit it looked like the craft landed, and that it had a red laser-like light when it went near the airport, It just sat there in midair, about 5' off the ground.

Julie: It followed the truck for about 4 miles, then suddenly disappeared, although brightly lit, the object made no noise at all. It was nothing from this planet. This is a real sighting. This is the real thing.

Spooners Highway Patrol district had no log entries about UFOs, nor were there any entries in the Polk County sheriffs log. But the Barron County Sheriffs Department log had an entry at 10:19 p.m. that stated Three officers saw it too. Cameron, Chetek & Vince Graf, Graf is a county deputy. Cameron police officer Ryan Hulback was on duty Monday evening. He said he saw something in the air near the intersection of Hwy. 8 and 53. He said it wasn’t unusual. What I saw appeared to be a helicopter.

Medical transport helicopters are based at the Rice Lake airport, but Stites said there was no record of helicopter flights during that time period.

Cheteks police log notes that at 10:28 p.m. all units were asked to look for a UFO between Cameron and Rice Lake. Reported was an object with 4 evenly spaced lights changing color from purple to orange to blue. The object was there for about 30 minutes and then disappeared. Sheriff Tom Richie said Graf saw some strange type of lighting, unusual lighting that he hadn’t seen before, but it certainly could have been some type of aircraft, some type of military training, who knows what it could be.