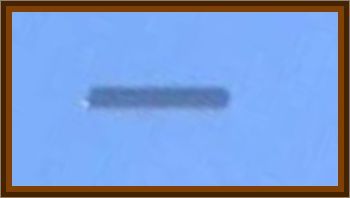 I was 12 at the time. My sister was 10, my older cousin about 25. We were traveling by car from Barre, VT to a summer house on Nelson Pond in Calais, Vermont. I believe the time to have been about 8:00 p.m., possibly a little later. It was dark outside already but there was enough light in the sky to see the silhouette of the tree line.

We were driving up a small hill, with a field on either side bordered by woods. We were in a green Chevrolet Impala sedan with four doors. My older cousin was driving, I was in the right passenger seat, my younger sister sat in the middle.

As we mounted the hill, we noticed a large bright ring of yellow and red lights in the sky to the left. It was relatively nearby, about 800' to 1200' feet in altitude is my guess, and it maintained its location for about 3 or 4 minutes. My cousin stopped the car and we just stared at it. I began to notice that the lights I had seen were on the bottom of a larger short cylinder shaped object. The cylinder was darkish brown, a little bit like anodized aluminum. The object was probably 5 - 6 times larger than the ring of light in the bottom. Rods or pipes, or maybe antennae extended from the sides of the cylinder. I remember thinking that there might be a window or a rectangle of light on the side of the cylinder, but that rectangle shape was not as intense as the ring of lights on the bottom.

At first I was calm, and fascinated. Then my cousin locked her door, reached past me and locked my door, and might have locked the back doors. I noticed my cousin was edgy, and had tears in her eyes. My sister began to cry.

The object began to move from left to right, which I believe was west to east. It did this quickly but also sort of jerkily, in a series of short quick moves. It maintained the same height for about I guess 3 minutes. It seemed like we were stopped for a long while. I remember the sound of the car, the headlights on the road, and the dashboard lights.

The movement was from about 10:30 in the sky to about 1:00. Then it moved rapidly upward, a similar quality of motion: fast but a little jerkiness to it. The object stayed in that position another minute to two minutes and then rose upward again very fast until it was no longer visible.

My dad suggested we had seen lights on a radio transmission tower. I knew we had not. Her husband joked about it.

Many years later my sister and I from time to time draw what we saw. We will do it in separate rooms. And the pictures are very similar. On several occasions we have drawn the scene from a perspective outdoors, looking down on the green Impala. Once a friend who saw those pictures observed that it was curious we drew it that way given we were in the car.

As a boy I was fascinated by space, the manned space program, and the possibility of space travel. I think that is why the initial response was just fascination, not fear, until my cousin began locking the doors.

Later in life I wondered if what we had seen might have been a product of our defense intelligence, or a spy vehicle from the Soviet Union.

Reports of similar experiences from mature friends, one in Wisconsin, and one in Maine makes me wonder about this. The edge of this thing were so sharp I can not imagine them to have been fog or vapor.