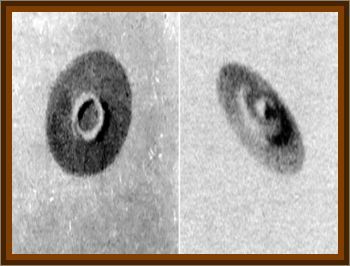 Joao Martins and Ed Keffel went to the place called Barra da Tijuca to do a routine job for their magazine. At 4:30 p.m., Martins spotted an object approaching in the air at high speed. He thought at first it was an airplane he was facing. It looked like an airplane. There was still something strange, Martins realized. That the plane was flying sideways.

What the devil is that?

Keffel had his rolleiflex camera at hand and Martins yelled:

Ed Keffel grabbed his loaded camera and got 5 pictures in about 60 seconds, thus obtaining the most sensational photographic sequence of a flying disk.

The Brazilian Air Force conducted an investigation and released a positive statement that the photos were genuine.

However, their report was not released to the public until 1959, 7 years later. It was first publicized by a local banker from The Bank of Brazil, through a television program. The banker carried on a quiet investigation of UFOs for years and received the cooperation of the Brazilian Investigation Commission on Flying Saucers, organized by the Brazilian Air Force.

Of all photographs of alleged UFOs, the Barra da Tijuca series is considered by the Aerial Phenomena Research Organization, APRO, to be some of the best on record. Debunkers though challenge any authenticity of the photos, others suspect a hoax, mainly because of lack of negatives and shadowing.