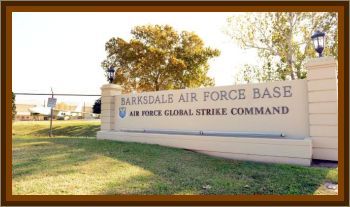 It came in toward me, turned sideways, remained motionless for about 2 minuets or so, then turned around and sped off in the direction it came from.

I went to the expermental hanger at Barksdale, and asked the guard if I could have a look inside.

Then I told him what I saw, he said he had seen the same thing, at which time he opened the man door and said:

Have a look, we have some goofey looking stuff, but nothing like that.