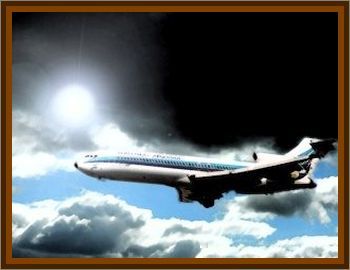 Jorge Polanco was about to land at Bariloche Airport, at the rudder of an Aerolineas Argentinas Boeing 727, when a light, dim at first, then intense and bright, got between the airliner and the runway. The captain immediately advised the control tower, but received a disconcerting reply:

It was no known aircraft. The strange light escorted the Boeing and its 100 passengers for 17 minutes.

A Gendarmería aircraft that was also in flight at the time confirmed seeing the same object. The tableau was made complete by another extraordinary event: A sudden blackout at the airport.

The case had great repercussion in the media worldwide. I was even visited by NASA specialists. This was the most definite, real and spectacular case. I witnessed two other episodes in my career, says Polanco.

15 years following his experience, he sees the Argentinean Air Force’s interest in these matters as something positive, provided that it’s done seriously. The two other cases the pilot alluded to occurred on 6 February 1995 when he was returning from Rio de Janeiro toward the Cordoba Airport, and was startled by a bright light. Upon contacting the tower, he received the same reply: Unknown traffic.

Another episode occurred on August 11, 1996. Flying over the city of Trelew, he crossed paths with a bright light for a third time.

I treat it as a natural occurrence. I believe there could be life on other systems; I’m convinced of it. I never bothered making my case known because most people do not take it seriously, Polanco reiterates.

On February 14, of this year, the crew of the 727, the crew of the military aircraft and UFO specialists met at Costanera to discuss the case. Polanco feels that it’s always good to keep these events fresh. Being air travel experts, we aren’t startled by a mere light. I think that there is more developed life than our own. I repeat, we are not the only ones who inhabit the planet, he says.