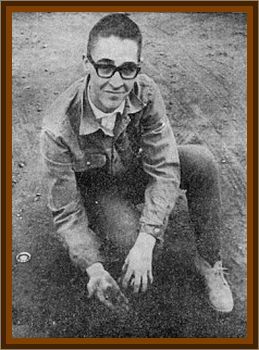 The bespectacled 14 year old was just going to his home at 5311 106th St., when he said he noticed the space ship and began the vigil which has probably resulted in the most detailed report of any UFO in the Edmonton area.

He said he noticed a white beamed light moving over the neighborhood and followed it for several blocks.

It disappeared over the Allendale district and I went home again. When I reached the front doorstep the second time, I saw it again and went and told my friend, Glenn Coates. Then we got some binoculars and watched it for a while.

When Glenn had to go home, I watched for a while longer and then followed it into the cemetery.

Ricky lives across the street from Mount Pleasant Cemetery where he said the closer observations and strange happenings occurred.

I hid under some trees for quite a while. I don’t know how long it was but it was long enough to get wet with dew.

It had a white ribbon of light coming down from the bottom of it. The ship was about 200' up in the air and it made sort of a muffled whistling noise as it hovered. I was about 50' away from the thread of light and the ground was white as though white hot, under it. The beam came straight down and then spreading out in kind of a rectangular shape about 6" above the ground.

When I stepped out from under the trees for a better look, the light disappeared, then there was kind of a screaming noise like a jet starting up. All the lights in the ship went out and there were about 7 or 8 bangs and it took off.

Observations of the cemetery later Sunday revealed several rectangular shaped black streaks along the sand gravel roads in the cemetery. There were several cinder like rocks in these burned areas and pebbles appeared to be charred. None of the grass areas or trees appeared to have been harmed.

Joseph Laforge, foreman of the cemetery, said today he could not explain the black marks. A grader went over the roads on Saturday, he said, and may have exposed some of the cinder base under the gravel.

But these ones here, Laforge said, pointing to two other large black marks, I don’t know about them, they look pretty unusual. Mr. Laforge had no explanation for the black marks on the stones.

I don’t know, We don’t use oil on the roads at all, said Laforge.

A sample of the rock has been sent to the Alberta Research Council for analysis.

Ricky described the ship as spherical with red and green lights. The top and bottom portions spun. Ricky said: I could see it quite plainly because it was almost daylight when it took off.

Ricky sketched his observation and showed the sketch to several other people who saw either the ship or the light beam. All 5 agreed that was what the object resembled.