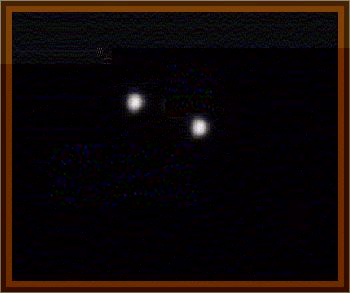 It was witnessed also by my mother who was staying the night with me. Neither of us had been drinking or was under the influence of medication.

At 7:45 p.m. I was outside, bringing in the washing off the clothes line, when I observed a single bright light hovering in the far distance. At first I thought it to be a bright star. However, whilst watching this star it suddenly moved quickly in a westerly direction, and the opposite side to the direction appeared to have a red glow. At first I thought it was the local Police helicopter, which often transits along the M4, which is not too far away.

Whilst trying to make out the shape of the object, it rapidly changed direction again, flying extremely fast to the east.

It was at this point I called for my mother to come outside and to witness what was happening. When I returned outside, the object was still in the same location, on the horizon to the northwest of my home. With both of us watching, it then sped to due west before flying to the south, passing above my home.

Whilst at that location it appeared to split into two separate sources of white light. The two lights then slowly accelerated to the west before disappearing over the horizon. Again, red light was visible from the trailing side of the objects.

The weather on the night in question was relatively clear, with only light cloud. I reported the incident to the police who then called RAF Lyneham, and was told nothing at all was visible on their radar reports.