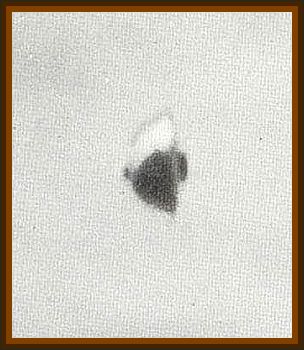 Known in Australia as the Balwyn UFO, this curious bell shaped object was photographed by a businessman from his garden in the Melbourne suburb of Balwyn.

The UFO was sighted and the picture was taken a few minutes after 2:00 p.m. with a Polaroid camera.

The case was meticulously documented by the Victorian Flying Saucer Research Society, VFSRS, of Moorabbin, with sketches of camera angles, distances, sun azimuths, and notations on light reflections from the UFO.

Much was made of the chimney in the photo as a reference point to calculate distances and elevations. The Society noted that the photo showed no sign of multiple exposure, montage, or any other tampering.