They Came From The North Pole 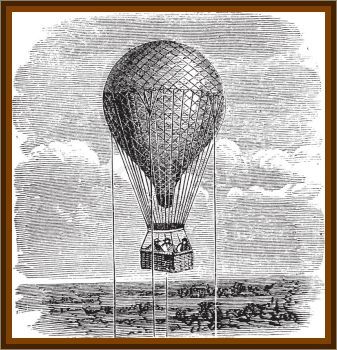 What the Greely party and a host of Arctic explorers have vainly sought to learn, whether or not animal and vegetable matter exists at the North Pole, has at last been discovered.

Floating vegetation has brought the theory that there was a climate in the Arctic regions where such matter grows. Not only has the theory been proven correct, but we now know human beings in an advance state of civilization inhabit this region. It will be remembered that on August 16, 1889 Dr. J.M. Stephens an eminent physician of Paris, sighted a balloon about ten miles north of here drifting in the clouds. His report created no little excitement at the time, as no one knew of its ascension or has since heard of its sighting. The fact was widely telegraphed by the newspaper reporters of Paris. The news correspondents had not thought of the circumstance for several days until the Frisco came in today from the Indian Territory.

John Stokes, a reliable citizen of the Choctaw Nation was one of the passengers. He lives between the Kiamshi River and Seven Devils Mountains. The reporter has known him for some time, having frequently met him at Decatur, in this state in the years 1886 and 1887.

Here, you newspaper men are always after news. I can give you some, he said, striking the reporter on the shoulder. He was too excited for introductory remarks.

You see that don't you?, he continued, as he produced three pieces of gold from his pocket.

They were about 3" long and round, being off different sizes. They were very plain, except that the smallest had one, and the other two had three indented circles in them.

This money, he said, came from the dumbest looking people you ever saw. On the August 16th, last month, they hit close to my house in a balloon, looked like they were about starved. This is some of the money they gave me and my wife for some provisions. They had scandoodles of gold. Hereupon he was plied thick and fast with questions, and the following is the summary of the many things he had to say:

It was about dinner time, and he was standing in his door at the house when he saw the balloon some distance off. He watched it till it came down about 300' from him and he at once ran to it. Four men stepped out of a very large wooded car or swinging room enclosed on all sides. It was about 10' x 12'. The queer people saluted him by bowing and, began talking in a language which he could not understand, whereupon they put their hands to their mouths indicating they were hungry and thirsty, and at the same time produced several pieces of this gold, which they held toward him.

Stokes gave them something to eat and drink, which they consumed with satisfaction. They communicated with hand signs and pointed to the north as they place they came from. They invited him into their airship which contained some queer instruments, maps, stools and places where they had stored provisions.

The room had three windows and one door. The windows were covered with some transparent material which looked like hide of a very fine texture.

The balloon which was two thirds inflated and was supported by three long rods reaching from top to the ground and seemed to be made of the same material.

The men were dressed in heavy coats and had their hair trained to stand straight and was trimmed in the shape of a cube the shortest part being about an inch long. They were below average size and of very light complexion. Their hair and eyes were black.

Stokes tried to persuade them to remain longer, but about 3 o'clock in the evening they took something that looked much like rosin, which they burned under a funnel shaped concern. The balloon soon became fully inflated and was ready, but not before he obtained one of the smaller maps, which he had with him.

Had the reporter not known Stokes to be an honest and sturdy man, he many have doubted the story, but the queer coins and chart and her to show for themselves. The latter leaves no room to believe that the thing was created by Stokes as it is on an unknown material and finely executed, the letters and names on the chart are evidently of Grecian origin. A few of the former are identically the same as Greek letters.

A comparison of it with a map of the Arctic regions shows that the men are from the North Pole, and had some knowledge of the country further south: Kennedy's channel, Peabody Bay and Smith Sound are plainly indicated here. The outlines where the maps breaks off shows they had a vague idea of Baffin Bay.

Stokes will make an affidavit to his story, and at the News reporter request will carefully preserve the coins and map as being of rare scientific value.