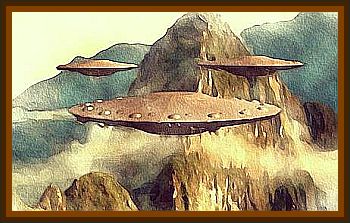 3 luminous craft visited the sky over the location much to the dismay of its citizens.

They watched the objects race errantly about for some time, when they stopped and hovered a few feet above the water. The craft were long, oval in shape and flattened along their lengths, each with a strange mast sitting on top of them.

The bay waters began to froth underneath them, giving off a dense orange vapor, accompanied by a loud, unpleasant noise.

From one of the craft 2 vaguely human looking beings appeared. They were described as being dressed in red clothes covered with silvery scales, with huge heads and luminous eyes. The creatures, holding cables or tubes attached to the craft, jumped into the water and moved about their ship for around 2 hours.

When they returned inside the object, all 3 left at a high rate of speed, leaving the terrified residents of Nice wondering at what this omen from God could possibly mean.